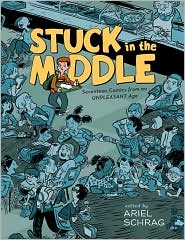 I need you to journey back in time with me. Back to the place before my brain was infected with Scott Pilgrim and when Ariel Schrag was the queen of my graphic novel universe. Remember that? Those were good times.

But then my universe came crashing down when I embarked on reading Likewise the third, and final book in Schrag’s High School Chronicles. Written in a Ullyssesesque stream of consciousness, I couldn’t take Likewise. My annoyance with the the WTFness of the narrative was a disappointment. I’d read pages and pages and then, like waking up from some sort of reverie, wonder what the hell was going on.

Like I said, I was crushed. But then I found Scott Pilgrim and life was grand again. However, as you know, Scott Pilgrim came to an end and I was bereft, set adrift on the sea of nothing. That was until I found Stuck in the Middle: 17 Comics from an Unpleasant Age an anthology edited by Schrag and featuring Middle School stories by her and sixteen other artists.

Some of the standouts included Ariel Bordeaux’s hilarious “The Disco Prairie Rebellion of ’81” and Daniel Clowes’ oddly touching “Like a Weed, Joe.” My affection for the Clowes piece comes as quite a surprise because I kind of abhor Ghost World like nobody’s business. Perhaps what I liked best about this book is that it introduced me to a bunch of comic artists without having to invest in each other their work individually. It’s a nice way to discover new authors and artists.