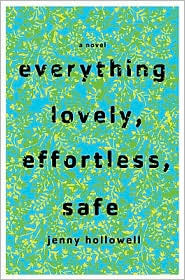 I’m thinking about joining the ranks of those boring, jackassy literary pundits who warn about the impending death of something: publishing, the novel, the short story, the traditional book, and everything else you love hold dear.

What am I declaring the death of? Story. Or at least good, engaging stories. Off the top of my head I can think of four books I’ve read this year that were well-written but lacked interesting stories or the stories fell apart midway through the book (The Particular Sadness of Lemon Cake, The Melting Season, The Girl Who Fell From the Sky, and The Ask). I can’t tell if it’s me or if it’s them. Is there a dearth of story in this year’s must-read books? Or am I just more demanding than usual?

You can add Jenny Hollowell’s Everything Lovely, Effortless, Safe to that list of beautifully-written books that lack an actual story. On the surface the story of Birdie Baker, a thirty-year-old struggling actress seems like it would be fraught with tension, but it’s not. Instead we get a sort of dreamy, wishy-washy portrayal of a woman so far removed from her life it feels like she’s floating through it.

Hollowell starts out strong. Instead of presenting Birdie’s backstory as a series of films (with no cameras rolling). It’s a smart and interesting way to get Birdie from her strict, religious Virginia home to Hollywood, but after that the bold storytelling goes away. Instead we’re left with a repetitive (Birdie spends a lot of time driving and sitting on her porch drinking), flat story about a depressed actress who hasn’t fully coped with her past and is on the verge of becoming embittered by all those who have done better than she has.

It’s kind of a drag, and it’s a shame, because the writing here is really wonderful.

Then the past arrived, rubbing against the window screen, and that poison air descended upon her bed. There was nothing new to remember, nothing new to feel there was only that same accumulation of losses, but here with the smell of honeysuckle all around, with the days spend in a green, humid haze, and with the lines she spoke still humming in her mouth, the venom of their judgments, she felt them more clearly. Absence after absence, emptiness after emptiness, nothing after nothing — in the darkness of the motel room her losses crowded around her like ghosts.

And while this passage is beautiful, it hints at what’s wrong with the story — “there’s nothing new to remember, nothing new to feel.” Why is that? Because Birdie has spent the preceding 164 pages moping about her past and feeling sorry for herself.