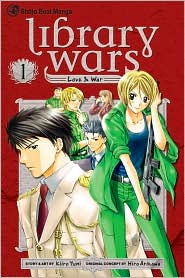 Being a librarian, I'm a sucker for anything library related. I love that librarian Katharine Hepburn is better than the computer in “Desk Set.” I cheered for the librarian uncovering a conspiracy and running for his life in Larry Beinhart's The Librarian. I just ordered a t-shirt reading, “I'm a librarian. Don't make me shush your ass.”

Knowing my library obsession, it really shouldn't be a surprise that, even though I don't read manga, I had to read Kiiro Yumi's Library Wars: Love & War, Volume One.

Library Wars follows Iku Kasahara during her Library Forces training where she's hoping to be a part of the Defense Force. The Defense Force fights on the front lines against the Media Betterment Committee, a federal government organization attempting to censor all media and books. Libraries, managed by the local governments, are the only institutions that can oppose their censorship, and war is brewing between the federal and local governments.

But don't forget the love part. There always has to be a love part when there is a strong, tomboyish, ass-kicking girl who argues with the hunky, rude, condescending trainer, who is really only hard on her because he believes in her, and she secretly sees and loves his soft side, yadda, yadda, yadda.

I hate him; he's mean; he’s helping me; I love him. She's overly confident; she's dangerous; I see good in her; I love her. Why are we continually fed the idea that the boy who punches us and pulls our hair actually loves us? And, sadly, when Iku screwed up in training her love interest does punch her in the face. Yep, in the face. But she loves him.

I tried to see past the punching scene so I chalked it up to military training. She screwed up and almost got killed, so maybe in the military punishment involves punches in the face? Just go with it or it'll be hard to continue reading, especially seeing her with a black eye in subsequent pages.

Learning about the Library Forces was interesting, especially the fact that those in the Defense Force have a more dangerous job than those in the Army. I want to hear more about that, but sadly a lot of this book involved Iku's relationship with her trainer. With some of the back story involving a mysterious man who is the reason Iku joined the Library Forces, I have a feeling the subsequent volumes will also be relationship heavy.