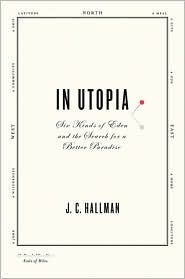 Among the notable observations I have made during recent trips to Orlando, Florida, were the highway signs pointing to Celebration. Thinking this was some strange slang Floridians use for Disney World, I later learned Celebration is a community designed by Walt Disney Company as a model city of the future. This whole idea of creating a utopian community both disturbs and intrigues me. It's disturbing because I don't believe anyone has the ability to do such a thing, and yet the gumption of someone to think and do such a thing intrigues me.

My disturbed intrigue about utopia fueled a desire to read J.C. Hallman's In Utopia: Six Kinds of Eden and the Search for a Better Paradise. Using Thomas More's 1516 book Utopia as a research framework, Hallman explores six different utopian projects: Pleistocene Wilderness Rewilding in New Mexico, Twin Oaks Intentional Community in Virginia, The World residential ocean liner, Slow Food movement in Italy, New Songdo City in South Korea, and Front Sight Firearms Training Institute in Nevada. Hallman researches the history of each project, finds historical parallels, and actually goes out and submerses himself into the particular utopia. At the very least, Hallman interviewed key people that are influential in creating these utopian projects. When possible, Hallman experiences the utopia himself by joining the community for a period of time. The link to More's Utopia and Hallman's own philosophical inquiry were consistently examined.

Hallman's writes with authority about utopia because of his research breadth and life experience. Furthermore, Hallman provides fair analysis that is neither overly apologetic toward utopian ideas nor completely negative.

“The truth is, utopians don't always slip, and any sympathetic survey of utopian thought, after acknowledging itself as utopian, must allow that the slouch toward tyranny of some utopias is not a misunderstood joke but part of the plan” (233).

In Utopia also has a slight sense of humor, which mainly showed up during Hallman's trip to Italy. This was a voyage made with his “significant adjacent cohabitator” who he labeled his docent (152). Hallman's amusing descriptions of traveling with someone you love (especially one with which you contrast with in eating and traveling styles) made me laugh. Infusing humor into quality research is always a plus.

The humor was just one facet of Hallman's personal interaction with In Utopia, an interaction that makes the book stand out from the crowd. The topic is worthy of examination on its own, but I as a reader am interested in human interactions, specifically the writer's interactions. Hallman not only told us about utopia; he showed us what it meant for him. This added dimension makes the topic come alive for the reader.