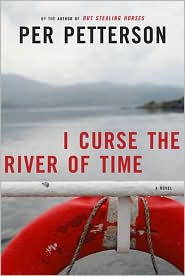 Finding fiction that I like can be a great challenge for me, so I tend to research potential candidates to make the process efficient. I tend to stick with ideas that resonate somehow with my worldview. Thankfully I have a wide interest field to choose from and know what topics to avoid, such as economics, born-again fundamentalist Christianity, and vampires.

However, this method failed me when I choose Per Petterson's I Curse the River of Time. This book was full of potential: rainy Scandinavian setting, worn Communist ideals, and an author that shares the same first name as a freestyle skateboarder. Petterson tells the story of Arvid Jansen, a middle age soon-to-be divorcee who is dealing with negotiating the past with his present and a sick mother. I Curse the River of Time was a mixed bag for me. Petterson's writing is not constrained to a linear timeline, holding me engaged and challenged. Furthermore, Petterson can really set a scene with his descriptive prose.

She could not see the mountains, but she know they were everywhere out there leaving their mark, every single day, on the people who lived in Norway. (p. 6)

Despite these qualities, I Curse the River of Time is simply a tired story of male middle age regret and search for meaning. It's a typical story and has been told many times in many ways. When one tells a typical story and includes negative stereotypes of indigenous people to buttress wonderful prose, the result is something rather disappointing.