It seems most of the MN Reads’ writers are on vacation. And I’m in the middle of about four books. So instead of a review, I’m going to ask you to help settle a raging debate.

Last week at Grumpy’s, a few of my classmates from The Loft’s Short-Short Fiction class were celebrating the our last session. Over some tator tots and jalapeno bacon we got to talking at Gary Shteyngart and how he’s coming to read at Magers & Quinn on September 21, which is the same night Jonathan Franzen is going to be at The Fitzgerald.

I mentioned how I’m in the midst of Shteyngart’s Super Sad True Love Story, which is kind of unsettling and creepy (in a very good way so far) and Will agreed that the book was kind of sad and depressing but that he mostly stopped reading it because of the author photo. Apparently he has issues with “neckwraps.”

“What the shit is a neckwrap?” I asked.

Will went on to fumble through a description of this alleged “neckwrap.” We were all confused. I was convinced it was something Mr. Furley had worn in “Three’s Company” (though I mistakenly claimed it was something Larry would wear to the Regal Beagle).

Last night, Will emailed me a picture of this alleged “neckwrap.”

I replied, “That’s a scarf. This, this is a neckwrap.” 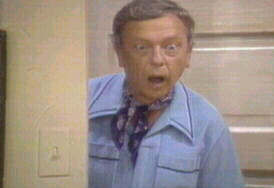 “YOU LIE” was his reply.
“Dude, I am totally going to ask the internet,” I said.

So internet. Which would you consider a neckwrap and and which a scarf?