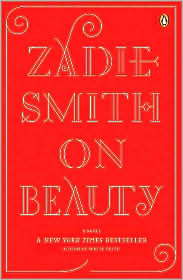 About a month ago I stumbled on a sidewalk sale where, between cheese curd vendors, a 5-year-old magician with a stunning vocabulary, and hippies juggling sticks, I found some castoffs from the public library: $1 for trade paper; $0.50 for mass market. I was in a rush. There was an Italian sausage calling my name half a block away. (“Meat me. Meat me.”) But I like books. And typically I spend 25 times more for them than what the library was asking. So I deferred to my nemesis “thrift,” and I dove in.

This was easy. Three carts filled front and back. I scanned the titles quickly: Dud. Dud. Religious fiction. Airport lit. Around me, people were carefully browsing, yanking books off shelves, reading the back, building piles. I was lapping them, two, three times over.

The fools, I thought. You have no idea. Cheap crime novels and menopause lit. WHO ARE YOU PEOPLE? DO YOU EVEN THINK ABOUT THE WORDS YOU PUT IN YOUR HEAD!?

And then I found Zadie Smith’s On Beauty. I liked White Teeth, although ask me what it was about and I’ll distract you with a coughing fit. (Sometimes “good” isn’t enough to keep me from plot amnesia). I handed over my buck, happy to help the library buy something nice and hopefully put my name on it.

As I made tracks toward the meat stand, I was super impressed with myself. There I was, on day three of a book sale, eyeing the picked over remains. AND I found something good. Something the dull, untrained eyes of my fellow readers had passed over for whatever reason that is none of my business. I re-visited the entire scene. My dexterity with the task. My skilled gaze, like someone who scouts antiques or appraises art. The way my hand instinctively made a grab for the gem of the collection. My poker face as I handed over the single bill, never revealing that I would have gone as high as $3, maybe even $5.

At the root of On Beauty are two fundamentally different families running parallel: The Belsey family is liberal, and they find religious affiliation laughable. Father Howard is a white Englishman, married to Kiki, who is black. Their children are Zora, an overachieving college student, more right brained than left, although bent on living an artistic life; Levi, a high school student interested in street culture; and Jerome, who is trying to filter through his upbringing to figure out what values to take into the real world.

The Kipps, who are more in the background of the story as foils to the Belsey family, are black, conservative Christians. Monty argues against affirmative action and conducts family breakfasts. His ailing wife is a “stand by your man” figure. His daughter Victoria is operating under a chaste, virginal facade, but is a stunning-looking head-turner of a woman. His son finds a shiny woman who accessorizes with a cross necklace to marry.

Both Howard Belsey and Monty Kipps, the family fathers, are involved in art critique, and teach at the college level. They spar publicly over differences in opinion about Rembrandt. Their worlds collide when Jerome Belsey takes a job with Monty Kipps and becomes enamored with his family. The exposure leaves him hungry for Christianity, and throbbing for Victoria — whom he intends to ask to marry him in a quaint Jane Austin-meets-technology sort of way. The shit hits the fan, there is some humiliation involved, and Howard extracts his son from the Kipps’ world.

Throughout the book, the families become even more entwined when Monty Kipps takes a job at the small liberal arts college where Howard doesn’t have tenure. Their wives develop a supersecret friendship, despite and because of their political differences; Victoria Kipps oozes into Howard’s art history class and tries to, ahem, befriend the instructor.

Adding to the layers of plot: Howard Belsey is in the doghouse over a three-week fling with a lifelong friend, a creative writing instructor at the university. His daughter Zora uses this info to get into the woman’s class; Levi Belsey has taken up with some Haitians and becomes embroiled in the community’s political struggles; A street poet named Carl becomes Zora’s pet project, and a reason to wear unflatteringly tight clothing. Monty Kipps, meanwhile, has a few shady secrets of his own.

This is such a meaty, layered and satisfying story told from multiple perspectives. There are some flinchingly honest scenes capable of making a reader squirm. When Kiki and Howard finally address his infidelity, Kiki screams at him about sleeping with a woman who is her antithesis: “You married a big black bitch and you run off with a fucking leprechaun?” she cries. As meekly responds: “Well, I married a slim black woman, actually. Not that it’s relevant.”

And when Howard is damn-near forced to stick it to a young coed, she performs a choreography of grunts and dirty talk, a truly embarrassing show of what she seems to think is sexuality.

Now she began to unbutton his shirt slowly, as if accompanying music were playing, and seemed disappointed not to find a pornographic rug of hair here. She rubbed it conceptually, as if the hair were indeed there, tugging at what little Howard possessed while — could it be — purring. … And then came more of this purring and moaning, although his hands had not yet reached her breasts …

Zadie Smith is so so good at building a story, forming characters, and developing a mix of honesty, realism and humor. Although this might be to a fault: It is so genuine, that I’m not sure I’ll remember this one any better than I remember White Teeth. But it is a fantastic ride when you’re nose deep in it.