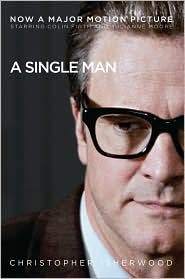 I think I came at Christopher Isherwood's A Single Man with the wrong approach. I saw the movie adaptation before I read the novel (I know. I know!) so I was expected some sort of eulogy, a soft and mournfully worded ode to a life about to end.

What I did not expect was a polemic, a collection of vehement little diatribes studded onto a thin skeleton of literary fiction.

A Single Man reminded me of the kind of books I was assigned to read in high school, books where characters took pains to spell out their (i.e. the author's) views on social or political topics. It moves forward in fits and starts, pulses of plot serving only to move the main character, George, forward to another scene and another character to whom he can spell out his opinions on any of a number of issues. The novel format here was seemed utilitarian. This is not to say there weren't good parts ? the opening pages felt like being hit with a lead slug, so powerful was the sense of being deadened and devoid of life ? but style and grace weren't Isherwood's motives for writing A Single Man.

That being said, I was startled by how fresh some of Isherwood's attitudes remain. A Single Man was first published in 1964, yet some of Isherwood's positions on higher education, American culture, suburbia, and social acceptance of gay men and women seem like they could have been made today. Reading it made me wonder if we've really come very far in this past half-century.