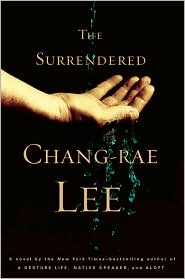 The Surrendered by Chang-Rae Lee is a novel of epic proportions. The book is set in the present tense, but very much of it takes place through remembering life during war.

June and Hector are the two main characters and they met during the Korean War. June was a young girl who lost her family and Hector, an American soldier who lost his way. They find themselves at the same orphanage. Hector is a handyman and June is the most disliked girl among the orphans. Both are in love with Sylvie, the new minister's wife.

She took off her husband's wedding band and put it in Sylvie's finger, where it hung loose. She removed her own and fit it on top, the second ring a good, tight fit.
'We love you more than anything,' her mother murmured, kissing her brow, her cheeks, her messy nose and eyes.
'I know,' Sylvie answered, if not quite believing it was true. They loved her, yes, but the whole world was woeful, all the places they had been were so bereft, that no one could blame them for having to care for it equally or perhaps even more than for their own child.”
-pg 226

Sylvie saw too much growing up as a minister's daughter and lost her parents in another war. She is addicted to opium and is clearly confused about her life. None of these imperfections matter to Hector or June. It is a fierce love and it clings to them, even after Sylvie's death and after they start new lives in the States.

Because June saves Hector's life in the fire that destroys the orphanage, he marries her and brings her to his home country. She disappears almost immediately, but not until after she has one night of confused relations with him. She never tries to find him or tell him about her son, until she is at the final battle of a war with stomach cancer. It is only due to June's illness and wish to see her runaway son, that she crosses paths with Hector for one last journey.

And yet here he was, dressing for an errand that he could hardly pretend had not partly become his own. He was increasingly curious about Nicholas, too, wondering about the bloodlines that he and June had given him; about its expression in his physical appearance, and then in his undeniably slippery character; what his voice sounded like; and then simply wanting to lay eyes on the young man, take in the shape of him astride the world.”
-pg 339

This novel is intense and unexpected. As soon as you start to guess at the plotline, it swerves madly in the other direction. This ingenuity of storytelling is what keeps the reader motivated through the dense pages. Lee's saga is thought-provoking and sensual. It captures the beauty and disparity of human lives as it examines the brutality and frivolousness of war. The Surrendered is one to read.