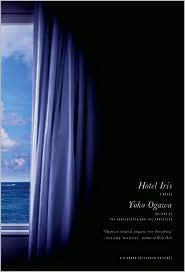 Mari is manning the front desk at the ramshackle sea-side hotel owned by her mother the night before the start of the busy season when a second-floor scuffle breaks out between a guest and a prostitute. The latter lands in the hallway, screeching and flailing, amid a mess of tossed pillows, strewn clothing, and a spilled purse. Other guests file into the hallway to gawk, and the john — a stoic suit-wearing sort — says to the woman in a hypnotic voice Mari likens to a mellow horn or a cello:

His voice wedges itself in Mari’s soul, and is the starter pistol to a whirlwind sadomasochistic, um . . . romance?. . . between the 17-year-old high school drop out with long shiny hair and a truck-load of self loathing, and the man — a translator who lives alone on an island and is rumored to have murdered his wife, the unlikely stars of Yoko Ogawa’s dark Japanese novella Hotel Iris.

Mari stalks the man, and as they take those first tentative steps toward awkward friendship, she finds herself in his home, face smooshed into the carpeting as he binds her and does all sorts of brutal stuff to her that would definitely be illegal if her eyes weren’t saying “Yes.” The relationship progresses to include all sorts of different bodily configurations a young girl can be tied up into. When she’s not putting the translator’s socks on him by using only her mouth, she’s back at the front desk biding her time until their next visit by blackmailing the hotel’s maid to keep her hush hush on Mari’s new hobby, and inventing reasons to escape her loveless mother’s death taskmaster death grip.

The translator has an unusual relationship with his nephew, a tongue-less, college-aged lad who requires that his food — even fish — be pureed. The maid at Hotel Iris is a kleptomaniac. Mari, who is confined daily to a space where everything is within her reach, seeks release by being beaten and manipulated by a man in a way that is a sexual rendering of how her mother treats her. Somewhere along the line there was a doting alcoholic father who was beaten to death and died young. Mari suspects her mother hates her, and does a shabby job of masking it by making sure her daughter’s hair is always perfect and oiled.

This is a strange and spare book filled with odd ticks. It’s like a song that ends before you can decide if you like it. And what drives the characters — the need to torture, the need to be tortured — is a little unclear. I guess it could be billed as an unconventional coming of age, the tale of a young woman who would not be satisfied with the typical base-running vocabulary of the peers she doesn’t have. I will probably spend more time wondering what the heck was going on with this book than it actually took me to read it.