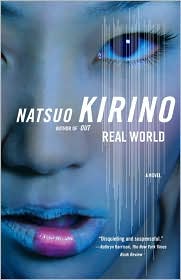 Natsuo Kirino has a way of describing heinous death scenes, and subsequent clean up, in a lazy, clinical monotone typically reserved for reciting the tasks on a to-do list. This can either create chilling suspense for the lack of emotion, or it can lull a reader into a desensitized state where the word “Smush!” in reference to skull-implement contact barely causes pause.

In her novel Real World, a high school boy nicknamed “Worm” bludgeons his mother to death with a baseball bat for no real reason beyond the perceived slightings that plague all emo teens — not just those living in a Japanese suburb: She’s annoying. He’s under too much pressure.

Toshi, the lead off narrator in a story that combines the voices of four teenaged girls and the murderer, hears the commotion from next door. She sees a cheerful Worm leaving the scene as she is on her way to cram school — a sort of summer school hosted by a cultish mix of peppy young adults who rah-rah studying with the enthusiasm of life coaches. While Toshi’s in class, Worm steals her bike and cell phone on his way out of dodge. He skirts around town building up a summer stink and calling Toshi’s besties from her phone.

When the body is discovered, Toshi lies to the police about seeing Worm and their brief interaction. She doesn’t tell them that he has her phone, and her wheels. Toshi and her friends, an eclectic mix of the misunderstood, coax Worm along in his flight.

First up is the butch Yuzan with her gravely man-voice, who trades a new cell phone and bike for Toshi’s stolen property. Yuzan is exploring her sexuality through out-of-the-way lesbian bars and is operating under the guise that her friends don’t know she’s gay (they do).

Then there is Kirarin, the band’s token sexpot, who is still smarting from a broken heart. Hobbies include: Trolling the internet for dudes, then hooking up. The thrill seeker agrees to meet up with Worm at a train station, intrigued by what a murderer looks like.

When Worm decides he needs a brilliant manifesto to up his cult status, he solicits Terauchi to write it for him. Terauchi sympathizes with the killer because of her own complicated feelings toward her mother, who is banging one of her coworkers on the sly.

The murder is just a backdrop for the relationships in this girl posse, who communicate via phone, text, and email and are never found in the same room throughout the short novel. The story is more about public face and private face, and how secrets might not be buried as deeply as a naive teen would assume.

As far as suspense novels go, it’s pretty light on chill — especially compared to Kirino’s novel Out, which chronicles, again, four women who murder an abusive husband, which turns out to be the gateway drug to a life of bathroom butchery. But it is a nice portrait of the teenaged girl as seen through the eyes of others, versus the eyes of self — a statement that sounds much more pleasant than the outcome for these ladies.