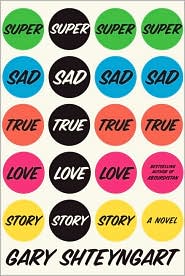 Gary Shteyngart’s fuckability levels must be off the chart right now. If he were to walk past a credit pole, numbers that rival elite college standard SAT scores would blink in his wake. He might even be considered a candidate for eternal life, according to the Post Human Services division of the Staatling-Wapachung Corporation — if he drinks his green tea and veers clear of trans fats.

Gary Shteyngart is so hot right now. He’s a newly-minted member of The New Yorker’s “20 Under 40” club; Every bit of media in the world that writes about writers is writing about him; There is a kicky trailer for his third novel Super Sad True Love Story, with a cast so ripe with hot author-types that it is damn-near a literary equivalent of the movie “The Outsiders.” (I’ll see your C.Thomas Howell, and raise you a Jay McInerney).

If you set aside the very farkle narkle media blitz that is required to have an “it” book, Super Sad True Love Story stands on its own. Although saturating the internet with Gary Shteyngart is very much in line with the theme of his dystopic love story set in a recognizable future where iPhone-like devices are called apparats, and everyone communicates on a social networking site called GlobalTeens, a hybrid of Facebook, YouTube, online banking, Google reader, and “Am I Hot or Not.” The texting dictionary has expanded to include things like JBF (just butt fucking), and TIMATOV (think I’m about to openly vomit).

Lennie Abramov is, by pop standards, an old man. The son of Russian immigrants, a slight Jewish man with a sunken face and gleaming white forehead and a sickle of a nose. On his last night of a yearlong work trip in Rome, he meets Eunice — a young Korean hottie matottie in her early 20s — and they have an awkward sexual exchange. While Lennie romanticizes the event, starts mentally planning a life with the 80-pound minx, Eunice is GlobalTeening her BFF about the gross guy she hooked up with, his awful bunions, how she had to teach him to brush his teeth.

Lennie returns to his unfashionable digs in the Lower East Side (all the cool kids — those involved with Media, Credit, or Retail — live on Staten Island). The single-party United States is at war with Venezuela. The dollar has been replaced by Chinese yaun. Girls wear onion-skin jeans, see-through attire that reveals waxing habits. Book-books are considered archaic and stinky. Reading one on an airplane draws the same sneers as, say, lighting a cigarette. Credit poles line the streets of New York, rankings projected when you walk past. A person’s fuckability number is always recalibrating. Go to a bar, and with a few taps on an apparat, you can learn that you are considered by other patrons to be the least attractive man in the room.

Eventually Eunice accepts Lennie’s invitation to return to the U.S., and live with him. Her father, a violent drunk, is tormenting her mother, an enabler, and her sister, a blossoming activist, over things like spoiled tofu. Euny wants to be nearby to monitor the situation, and in the process falls a little bit in love with Lennie, but never stops quantifying those feelings with admissions that he’s old and unattractive and a nerd-face with a nose like an elephant.

They take long walks through Central Park, where Low Net Worth Individuals have set up a sort of resistance camp. They travel to Staten Island to hang with Lennie’s college friends: Noah and his girlfriend, who are always mid-live stream, and the comparatively domesticated couple Vishnu and Grace. Lennie tries to reclaim favor with Joshie, the 70-something owner of a company that helps High Net Worth Individuals live forever. Joshie is also a customer, his face melded into something that looks less war torn than Lennie’s, and his vocabulary an embarrassing text-lish where he incorporates the acronyms, but also falls into, say, Groucho Marx-isms.

And then everything combusts in a sort of 9/11 way. Apparats go dark, water is scarce, and survival depends on who you know, where you work, and education level.

There is a lot, a lot going on in this super delicious novel. It’s like one of those movies you would have to see six times to notice every nuance to fully appreciate. It is funny, and sweet, and also a little scary for its proximity to now, a world where everyday we put our lives in danger by text messaging while crossing the street. Where a thought isn’t just a thought, it’s a status update, and books with pages are being phased out in popularity for their e-counterparts. It’s a real thinker on a lot of levels: Political, social, communication and even the role of those stinky novels we like so much. Consider what Shteyngart said to the Wall Street Journal in a recent interview:

“The novel is a disaster at this point. It’s not a disaster that there are no good novels being written. There are wonderful novels written. It’s that our brains are being disassembled right now and being put back together in a whole different shape, and that is not going to be conducive to reading a 300-page thing that doesn’t have any links.”