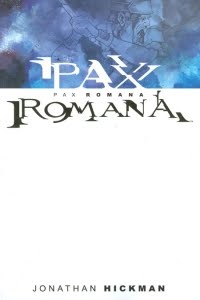 I am no expert in graphic novels. I typically read graphic novels only at the recommendation of others. Jonathan Hickman's Pax Romana came to me thanks in part to my interest in the Catholic Church. I'll fall asleep reading anything about economics, but start a discussion about Popes, transubstantiation, or sacraments and I'll fall over my kneeler to contribute.

Pax Romana is a science fiction account of the Vatican's attempt to create a new future by destroying the past. In the year 2053, the Holy See's science wing develops time travel. Pope Pius XIII and a select group of Cardinals decide to hire an army of fighters to travel back to Constantine's era and make some slight historical changes. Predictably, the human tendencies of these time traveling fighters interfere with the mission and significantly alter the future.

There are only a few aspects of Pax Romana that I liked. Hickman's Gene Pope-a genetically engineered person formed of preserved DNA from 1,000 holy men and women-was one of my favorites. The Gene Pope is created in a petri dish and grown in a synthetic uterus. This creation becomes a repository of all Vatican information contained in the famed secret archives and is updated hourly via a computer upload.

However, the bulk of Pax Romana is negative. The story of sending humans back in time to complete a mission and succumbing to human ideals is predictable. The shadowy faces made distinguishing characters difficult for me. Furthermore, women in this book are a rarity and negatively portrayed when shown at all.

An incorrect portrayal of Catholic doctrine weakens the book's credibility. Part of the time-traveling fighters' oath reads as follows:

And finally, do you unhesitatingly accept and profess all the doctrines of the Roman Pontiff? Do you believe in the supreme teachings and infallibility of the Holy See? Do you freely profess and truly hold the Catholic faith, outside of which not one can be truly saved?

Catholic doctrine does not say this regarding salvation outside of the church. Instead, it says the following in the Catechism:

“Since Christ died for all, and since all men are in fact called to one and the same destiny, which is divine, we must hold that the Holy Spirit offers to all the possibility of being made partakers, in a way known to God, of the Paschal mystery.” Every man who is ignorant of the Gospel of Christ and of his Church, but seeks the truth and does the will of God in accordance with his understanding of it, can be saved. (1260)

Then there is the matter of Pax Romana's an anti-Islamic bent.

In the old future, due do economics and ethnic population shifts, what was called Europe had been overrun by the religion called Islam; and in the East and West, monotheism was on a perpetual wane. Because of this, the religion called Catholicism was facing a certain end.

It is typical of many western writers to negatively portray Islam as gobbling up continents and becoming a problem that needs to be dealt with by extraordinary methods. It's a paranoid crutch that unfortunately contributes to the Islamophobia that is running rampant in the United States.

These issues weigh down the book's positives and turn it into something rather below average.