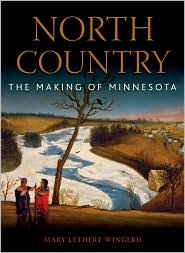 Being the only non-Minnesotan in my family, I had to take a history course in college to learn about the state I moved to some sixteen years ago. So in 2004, my second course at Augsburg College was Bill Green's Minnesota History. Green, who recently stepped down after four years serving as Minneapolis' public school superintendent, used a textbook by historian Theodore Blegen called Minnesota: A History of the State. In what was my first exposure to different histories, Green moved way beyond Blegen's romantic and one-sided history to offer other views of Minnesota's formation. Rather than the Father Hennepin history often told in the public schools, Green offered a different Minnesota history, one told from Ojibwe, Dakota, and African-American vantage points. I was enlightened and grateful.

Mary Lethert Wingerd's North Country: The Making of Minnesota is comprehensive account of Minnesota's formation. North Country is not Blegen's version of history but rather a history much like the one I learned from Green. Wingerd shows the intricate relationships among the many factions in Minnesota's history, rather than simply telling about people and events. For example, indigenous populations in North Country are neither helpless victims nor constantly on the warpath. Instead, indigenous groups are complex communities worthy of examination in their own right. Economic and geographical contexts are constantly examined, as well as illustrating existing and new cultural patterns created in Minnesota's infancy.

North Country is not a book one pops open and finishes over the weekend. This book reads like a textbook with wonderful citations from many quality sources. I had to read half and take a week-long break before finishing it. There are 141 color illustrations and many maps that offer rich visual context. Though it is dense and full of information, North Country is a valuable book that gives the reader a complete history about Minnesota's formation.