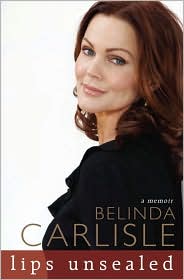 I fell in love with Belinda Carlisle in the back of a clunky brown passenger van in the summer of 1987, my walkman spinning the cassette of her debut solo album, “Belinda.” On the cover, the most beautiful woman in the world was dressed in all black against a Hubba Bubba pink backdrop, her bob flung whimsically in a way that said “I’m the kind of girl who tosses her hair. I’m always having fun.”

To see her on MTV supported this personae. In her videos, Belinda Carlisle spun and rolled in the sand, dance-flirted on sun porches, made love to a convertible’s head rest with her voice — a voice that sounded equal parts cigarettes and Tab. Her clothes always dangled off bare shoulders, like she had dressed hastily in the morning before sneaking out a bedroom window. Never trashy, though. What people mean when they say: “Why, she’s a natural beauty.”

In her memoir Lips Unsealed the former Go-Go reveals that this was all a front. Beneath the tousled red hair and pearly whites, she was a coke head in an internal state of controlled chaos. She was on and off the wagon so many times she should have splinter scars on the backs of her thighs. This shouldn’t come as a surprise. The Go-Gos reputation for partying hardy was well-documented, and frequently Carlisle’s own binges ruined live performances — both televised and at sold-out concerts — and pissed off her band mates.

In 2005 she snorted her last snort after envisioning herself OD’d in a hotel room — death by hotel room being popular in the crowd she ran with. (Consider her old friend-with-benefits Michael Hutchence of INXS). Not to mention that her longtime husband Morgan Mason — he of the kissy face moments in the video for “Mad About You” — was pretty much done with her secret stashes and wonky-eyed returns from touring.

Carlisle was a chubby club girl — nicknamed “Belimpa” by her high school classmates — in the late 1970s, hanging in the Hollywood punk scene with her gal pals. One night, sitting on a curb, they decided to start the band that would eventually become the internationally beloved Go-Gos. Amount of musicality between them: Nada. (Carlisle told those shrieking sociopaths on “The View” recently that in those days it was pretty uncool to actually know how to play an instrument).

Soon after they were touring in Europe, and went on to become the first all-girl band to write and play their own instruments and land a number one record. By then they had shed their punk roots and were producing something a little more poppy than they were first comfortable with.

Of course, the Go-Gos were pretty short-lived. They were divided between the party girls and the not-so party girls, and later there was some resentment about their front woman’s bigger hotel rooms, and role as spokeswoman. Rightfully so: While the other women learned their instruments and earned songwriting credits, Belinda Carlisle was completely divorced from the creative process.

Carlisle went on to get married, develop a solo career that started up here, and progressively spiraled into the discount bin at used record shops. There were reunion tours with the Go-Gos, and drug binges across the globe that included a particularly harrowing experience involving pallets of coke guarded by machine guns. There were weepy promises made to her husband, and a brief reprieve from addiction while she was pregnant with her son. Add to this a Madonna-inspired eating disorder, fueled by seeing how svelte the Queen Material Girl had gotten and comparing herself unfavorably. Then there is the time she gets coked up in the bathroom at her son’s school . . .

Speaking of purging: This book is a big one. Carlisle puts it all out there, seemingly leaving no part of her life for the sequel. This memoir doesn’t necessarily paint the newly-minted AARP member as a real sweetheart. And since she’s being so goll darn honest, she fact checks a few of the rumors that have been spun about her over the years no matter how inane and forgettable they are to the general public. Things like:

These dolled out digs are a little trite, but hey, if she’s going to splay her story without romanticizing an ounce (or gram, as the case may be), she’s allowed a bit of self indulgence. She is exactly what you would expect from a 1980s rock star, right down to the part where she cleans up her act and includes the Dalai Lama on her reading list.

These days Belinda is living in the south of France. She’s a spokesperson for a weight loss system. Her son is en route for college, and she’s still married to the romantic lead from her music videos. She was on one of those reality dance competitions, and was ix-nayed early. She has been sober five years. The Go-Gos had planned a summer last-ditch reunion tour, but Jane took a digger when hiking and an ACL surgery took precedent over teams of 40-something white women and sex-starved middle-aged men in jean shorts singing “Vacation” in unison.

Many years ago I wrote a bloggy love letter to Belinda Carlisle, and said that I didn’t really want to know about her real life. I wanted her to be that woman skipping through an apartment, singing and tossing her hair. Beaming and shiny skinned. The character, not the Wikipedia entry. I didn’t want to see her strung out at 8 a.m., Rod Stewart screaming at her for keeping him up all night.

But now that is untrue. This book was delicious. I’ve been having mini-Belinda video fests for the past few days, and falling in love with her all over again. Let’s just say: I feel the magic like I’ve never felt before.