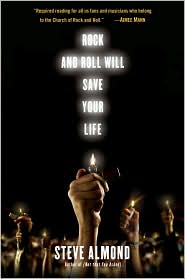 Do you have that friend in your life who, depending on the day and your mood, you are either madly in love with or so annoyed by you want to shove him in front of a bus? After reading Rock and Roll Will Save Your Life, I’m pretty convinced that if Steve Almond were my friend, he’d be that friend. Why? because he’d write things like, “he called me because, well, misery loves another idiot with a jukebox where his soul should be.” And he’d also wank on endlessly about some musical genius he loved that I’d never heard of. See how it could be love or murder?

First a confession: I have a weird fetish for/obsession with rock & roll memoir/essays books. I read every one that comes down the pike in hopes of finding an author that can put into words the relationship I’ve had with rock & roll better than I can. I’m pretty sure that if they let a woman write this type of a book, she could do it. So far, I have not found a woman who has written this kind of book. No, it seems these kinds of essay-memoir-rock-and-roll books are reserved for the Steve Almonds, Rob Sheffields, and Chuck Klostermans of the world.

Yes, yes I know woman have written books about rock & roll. I’ve tried them all. But not one of them, at least that I’ve found, has written the memoir/essays book about being a music fan and what the music has meant to her. No, usually the rock and roll books by women are about being in the band or the women’s revolution in rock & roll (60s, 70s, 80s, 90s– pick your revolution).

You’d be hard-pressed to find a book by a woman about her experience with music fandom (and groupie memoirs don’t count). If you know of one, a good one, let me know and I’ll be your best friend forever.

Not surprising, it’s those parts of Rock and Roll Will Save Your Life where Almond goes all rock journalist I found the most unappealing. I’m not the kind of fan who wants to know where my musical idols live and what they drink for lunch and what their studio looks like. I just don’t care. Unless the rockstar is telling me exactly who or what a song is about, I just don’t care. Almond does. (A cavet: I did eat up the chapter about Ike Reilly, because I love Ike Reilly. In fact it was Almond’s inclusion of “Commie Drives a Nova” on his Largehearted Boy Book Notes essay that prompted me to give the book a shot)

However, most of these profiles come towards the end of the book and by that time Almond has been so charming you’re willing to indulge him his little fanboy escapades.

Almond’s funny and he’s a good writer, this combination is divine. I can’t even count how many times I laughed out loud. He does lyrical takedowns of Toto’s “Africa” and Air Supply’s “All Out of Love” that are so funny I live with the hope that in the future there will be an Almond book that is nothing but the explanation of lyrics. Like this about “Africa”:

Our hero is waiting for a female whose plane arrives just after midnight. Got it. This seems to place him in or around an airport, the sort of airport within earshot of drums. He can see the wings of the plane, which are lit by the moon and also, curiously, able to reflect the stars.

Finally, because I’m already at 660 words, I’m going to provide you with a 6-bullet list of things I really adored in this book. You can consider it 6 reasons you should go read it.

(Also, the stuff he writes about his wife and Kip Winger is totally awesome. I promise to shut up now. Really. Go get the book. It’s fun.)