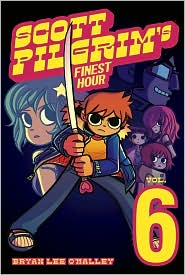 I was so excited to read Scott Pilgirm’s Finest Hour, the sixth and final volume in the series, that even though I had ordered it for ridiculously cheap, the moment I got near Big Brain Comics last Tuesday I caved and bought another copy. There was no way in hell I was going to be able to wait another day to find out what happend to Scott, Ramona, and their gang of wry sidekicks.

Volume 6 takes place roughly four months after Volume 5. Ramona’s MIA, Scott’s vegging in an apartment paid for by his parents, and Sex Bob-Omb has broken up. Things are not going well for our favorite Canadian hipster doofus.

Eventually that gang of wry sidekicks rouses Scott from his funk and forces him to face his pathetic life and the seventh evil-ex Gideon Graves. It is the battle we’ve all been waiting for and it’s well worth the wait. If it seems I’m being intentionally vague, it’s because I am. I don’t want to be a spoiler. Bryan Lee O’Malley reveals a lot about where the characters are going, some of it is shocking, some of it’s not. However, I don’t want to ruin any of the delicious surprises Volume 6 has.

Endings are hard, so it was with a little bit of trepidation that I jumped into Volume 6. Since I was one of the first of my friends to read it, many have asked what I thought.

“He ends it well,” I told each of them. It sounds like damning with faint praise, but that’s not it at all. There were many routes O’Malley could have taken. He could have gone down the schmaltzy sentimental route which would have felt like being manipulated. He could have come at us from out of nowhere with a bunch of left field surprises which would have felt like selling out the characters for the sake of shock. Instead he stays true to his characters and delivers an ending that is full of optimism and epic video-gamesque battles.

What O’Malley has created here is a funny, touching coming of age tale for twentysomethings. It’s about letting go of childish things, dumping that bullshit emotional baggage (literally and figuratively) that we all like to cling to in our 20s (that whole “I’m so broken and flawed and my pain make me unique and mysterious” bullshit) and opening yourself up to possibility. It sounds hokey, but in his hands it’s not at all.

No, in O’Malley’s hands it’s funny and fun and surprisingly touching. Oh, just go buy the books already. Read them now before the movie ruins everything (not that I expect the movie to be bad, but because it will spoil all the surprising things in the books).