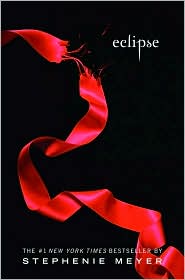 All is well with the emo, Bright Eyes-bleeding couple Bella and Edward when Eclipse, the third book of Stephenie Meyer’s uber-sensitivo contemporary goth novel opens.

This one is more of a bosom clutching, fainting spells romance than the previous book in the series, New Moon. The young love birds are following a period of crossed telepathy wires, death wishes, emaciation, and a heated tour of Italy’s fanged underworld.

The nagging outside interference is coming from La Push: Jacob is pissed off at Bella, and she is desperately missing the bestie (beastie?) who coaxed her through a particularly self-destructive period with thrill seeking adventures and plenty of petting and fawning.

When Bella tries to fix things with Jacob, she meets resistance from her boyfriend, a real classic scenario in the history of high school relationships. Eventually Mr. Cool Blood realizes that he is better off letting her chill with her homey, than fighting her and building resentment. Jacob, meanwhile, has discovered an additional layer of ab muscles and has developed serious hot pants for young Bella — instead of the chaste Hallmark pining of yesteryear. While he would like nothing more than to throw her down on their special rock and make speedy, unsophisticated love (which I have to imagine would be something like a dog humping her leg), Bella is keeping ’em crossed. Edward has the key to her chastity belt, and she damn-near begs him to, um, use it. Use it hard.

Bella is unwilling to be just another 18 year old who trades in her mortar board for a marriage certificate. She explains to Edward that he has her forever, why does she need to prove it with the Mrs. Cullen moniker?

For those keeping track at home, everyone but the Morrissey-caliber asexual Edward is getting blue balled.

There is a tentative plan to turn Bella into a vampire after graduation. The mad duo is going to run off and Nosferatu-ize the shit out of her so they can be together for ever and ever and ever. Of course, Edward is skittish. Bella is putting on a brave face. Jacob, who learns of the plan, howls in horror. Even Rosalie Cullen gets in on it, taking a little girl-to-vampire-girl time to tell her she is making a huge mistake.

Meanwhile, it becomes apparent that some external force is hunting down Bella, who has a pretty sick list of other worldly enemies for someone so vanilla. Shock of all shocks, the vamps and wolfs form a temporary alliance to rid the greater Forks area of evil beings. And, uh oh, maybe these feelings for Jacob are a little south of friendly, like Bella has convinced herself. She seems to have a bit of a craving for the hair of the dog.

This is, without a doubt better than both its predecessors in the series. But that isn’t saying much. It’s like: Which way do you like mushrooms served best, madam? As a whole, the story is more compelling. The pacing is better. It’s still overwrought. It still is a disturbing portrait of the nose-dive of the American teen-ager’s ideas that stalking plus longing equals love.

The fact remains that no one in the tois-some is very likable. Bella is moody and demanding, and defined by all the things she does not like: Girls night out, shopping, parties in her honor, dresses and makeup, the grunts, dweebs, jocks and princesses who roam the hallways at her high school. She likes classic romantic fiction (in this book it is Wuthering Heights, in No. 2 it was Romeo & Juliet) and cruising on her motorbike (which she never does because she is, like, grounded from it). She really, really, really likes Edward, duh. And she really, really, really likes Jacob (uh oh).

Edward must have had a life at some point. But since meeting the aromatic Bella, all of his waking hours — and they are all waking hours since vamps don’t sleep — are spent securing her perimeter. Sometimes this is helpful, as he is able to ward off attacks. But sometimes his proximity merely allows him to catch some frozen hamburger she dropped before it hits the kitchen floor. And something the kiddies might not realize is a close cousin to abuse: When Bella decides to sneak out and visit Jacob, Edward preempts it by removing a crucial piece of her car’s engine so she can’t leave. It has, admittedly, been a few years since I’ve subscribed to Cosmo, but this seems like some sort of red flag from a cover story.

Jacob, a relative good guy, face-molests Bella despite her protests. And when it comes for the battle royale, he threatens to purposely get himself killed during the standoff — a deliberate ploy to elicit some sort of response from Bella. It works even better than Mr. Manipulation could have anticipated.

Where the first two books of the series felt like Meyer had taken a roll of Bounty, and swabbed the story dry of any humor, Eclipse has a few stray self-aware, and much appreciated, punchlines. In one scene, that towering beefcake Jacob shows up at Forks High. He needs to talk to Edward, and the two square off near the parking lot. Things get a little heated, a sort of supernatural shit storm brews. On the sidelines, the pedestrian teens — the one’s who can’t lift cars or grow a mustache, let alone a hairy back — are placing their bets in a way that apes many a slumber party debate.

Mike grinned. “Anyone in the mood for a bet?”
“Ten on Jacob,” Austin said at once.
“Ten on Cullen,” Tyler chimed in.
“Ten on Edward,” Ben agreed.
“Jacob,” Mike said.

Even the dud classmate are in the world’s greatest debate.

Instead of caulking the cracks and ignoring the characters’ faults (psycho stalk much, Edward?) and the more disturbing aspects of our hero’s relationship (co-dependent much, Bella?) Meyer addresses these issues. Bella’s parents finally, finally express concern that this 18-year-old is in a relationship that is, perhaps, a little intense for someone who probably still has the price tags on her training bra. In real life, this is exactly the kind of all-consuming passion Maury Povich drools about: One ripe with the potential for a suicide pact. Her father openly expresses hostility toward Edward, and awkwardly initiates a sex talk with Bella; Her mother, Renee, uses the set of a Summer’s Eve Douche commercial — a slow walk on a beach — to question the adhesive nature of their attachment.

There are worse books than this one: Twilight and New Moon, for example. In fact, there are even worse books than this one not by Stephenie Meyer. If you can find a way to ignore the sexism, the overwrought puppy journal-style entries, and forget the impact of this series on hundreds of thousands of young girls — and not to mention their mothers — it isn’t bad at all.