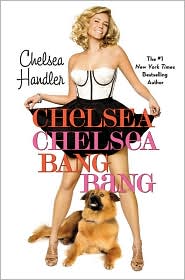 After reading Chelsea Chelsea Bang Bang, I can't decide if Chelsea Handler is going to save printed entertainment or drive the final nail into the format's coffin.

The arguments for her as print's savior: this is her third New York Times bestseller, so she's apparently converting viewers of her late-night cable show into Barnes & Noble customers. Also, she can be damn funny.

The arguments for her as its grim reaper: she evidently couldn't care less about key story-telling principles, like consistency and keeping the reader informed, and so writes in such a sloppy manner that she'll never be mistaken for someone with a functioning understanding of how to construct a well-proportioned essay.

But some stories are so sloppily put together it's a shame Handler didn't have a tougher editor. “Black-on-Black Crime” reads like listening to an overly long story that means something only to the person telling it. It's far too inside-jokey to be enjoyable. Also, the way Handler recounts conversations smacks a little of self-indulgence; I know she's a comedian, but no one is possibly as wry and witty as she makes herself out to be, and that annoyed me after awhile.

Ultimately, I have to forgive Handler's transgressions against the English language. She's genuinely humorous, and that's more than I can say for a lot of “comic” authors who nevertheless understand plotting and style.