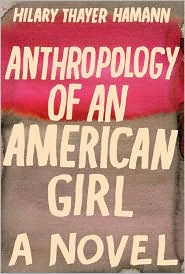 I have just spent two-plus weeks marinating in a slow vacation-style paced read of Anthropology of an American Girl by Hilary Thayer Hamann, and I think the readjustment period to normal life is going to be a bit shaky. So far it has been like yawning awake after an amazing dream. Looking around groggily and wondering, Huh. When did summer get here?

My God, this novel is intense and brilliant, so beautiful. Words I usually reserve for Haruki Murakami. This is the best thing I have read in years, filled with the best sentences I’ve ever read.

It starts with lazy days in Southhampton, the proverbial calm before the storm. Eveline and her best friend Kate are in those in-between teen years where they have the resources to get stoned at the beach, but bike home in a girlish lanky-limbed way. Evie is an artist, open and curious, living with her free spirit, socially-conscious mother in a shack by the railroad tracks. Kate is into theater, just discovering what it means to be pretty. Her mother, a wise French woman, first is dying, then will die leaving both girls without their main source of maternal comfort. Kate moves in with Evie, the beginning of the dissolution of the girls’ relationship.

Evie’s boyfriend Jack is a wanderer, a philosopher, a trouble-maker according to his father — whom he has tried to kill. A nonconformist, he’s a musician searching for authenticity. And they have this incredible relationship like they are linked by a virtual umbilical chord. When Evie makes anonymous tracks in the snow in a parking lot, Jack knows that she made them. While ripping apart his bedroom in a manic fit, he finds a card addressed to a woman named Eveline beneath the carpeting, left decades earlier. Like a postcard from the universe. They speak to each other in paragraphs about things like impulses, and whether acting on them is a feral character flaw. Between them, every gesture has deep meaning. Everything is real thinky.

And so, when something chemical happens between Evie and the substitute drama teacher Harrison Rourke — on first impact — Jack senses it before Evie can even define it. Kate flounces around with a very public crush on the teacher who is directing the school play, and for Evie things are in a slow burn beneath the surface. Though they have barely spoken, every time Evie runs into Roarke there is this physical reaction involving gazes and brushes and touching.

Time out: At a time when good old-fashioned longing has become the Play-Doh Fun Factory of Stephenie Meyer, Hamann handles it in such a deep and real way. These characters aren’t wearing metaphorical chastity belts. They are plodding through life beneath a heavy, heavy blanket of reality. Where wanting something, and needing something, are so beautiful just for the sake of ripping someone to life and making them feel something and everything.

Finally, in a dramatic moment that outdoes the greatest of bodice-rippers, they are able to be together. They spend the summer in Montauk, with the knowledge that there is an end-point. Evie will be going off to NYU at the end of the summer; the ever-mysterious Roarke has plans, too. But briefly they are naked and happy, drinking and in the sun. Friends and parties and free to finally knead at each other and moan.

Then it ends. Evie in a dorm room, broken with loss. Roarke God-knows where. She is taken in by the posse he left behind: Rob, who is Roarke’s lifelong wingman and fiercely loyal, unquestionably in love with Evie, charged with watching out for her; Mark, a big time gamer with unlimited cash, who nurses her back to health after she miscarries the summer love-child. Evie gets into a relationship with Mark, a sort of oppressive character who keeps her in cars and money, the freedom to make her art . . . while understanding that he will never fully have her soul. He is fine with that, and considers possessing her to be a great big “fuck you” to his rival Roarke.

Of course there are hiccups. Occasional Roarke sightings that open old wounds, and insight into his demons. Turns out he’s a boxer, and pretty good at it too. Evie coasts along barely playing the role of a human being.

There are four things about this novel that I am overlooking in favor of the incredible experience of reading it:

Regardless, I stand by my belief that this is a stunning book filled with so much smart, so much great phrasing, intense imagery, and a beautiful story. Go. Read now.