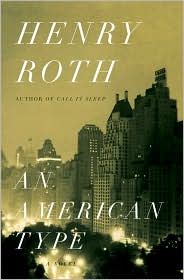 An American Type is a posthumous work by Henry Roth. Edited by The New Yorker magazine fiction editor Willing Davidson, An American Type is an autobiographical novel and a continuation of Roth's previous novels, a fact I failed to recognize before requesting a review copy. Set during the Great Depression, Roth's alter ego Ira is a struggling writer that falls in love with a woman named M. Ira breaks up with his girlfriend Edith, travels to Los Angeles, and realizes how much he loves M, who remained back in Manhattan. Broke and struggling, Ira moves back to Manhattan and marries M.

Roth is a fantastic descriptive writer, but the story itself was weak. Breweries with malty auras, red-penciled map routes, and people sitting tautly quiet are just some memorable descriptions in An American Type. However, the struggling writer traveling across the country trying to find both a literary identity and to cultivate romance with a true love is not an earth shattering story. It's like an artist creating beautiful poetry about someone painting a fence. The colors can be vividly described, and the brush strokes can be elegantly illustrated. However, the person is still only painting a fence.

Furthermore, An American Type is rife with negative gender, racial, sexual orientation, indigenous, and religious stereotypes. There are plenty of slurs to go around as well. Now I'm sure Roman Polanski-like contextual rationalizations will surface to justify the stereotypes and slurs as necessary to portray Great Depression life and attitudes. Davidson said that An American Type is “a love story, and it's a novel-perhaps the last direct testament-of the Great Depression” (p. 276). However, I tend to think one can write a good account of this time without descending into human degradation. Roth and editor Davidson have added to the lengthy body of work that carries on these stereotypes and slurs to a new generation.