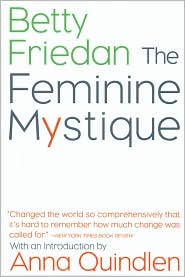 It’s impossible to review Betty Friedan’s The Feminine Mystique in 2010. I’ve been trying to come up with the words for weeks now.

Women have gotten PhDs dissecting this book, what it meant to women in 1963, and the repercussions of its publication. I cannot measure its goodness or badness in a few pithy sentences. In fact, I even have a hard time being critical about the book’s many flaws — mainly that it’s written for and about white, upper-middle class, straight, college-educated women. Plus, it seems, Friedan seems to think education is only for those white, upper-middle class, straight women.

Despite its flaws, I want to press this book into the hands of every woman I know (and a lot of the men). Ladies, we’re still perpetuating and falling victim to the Feminine Mystique. You should read it. Everyone should read it, not just to see how far we’ve come but how far we have yet to go.

This book has changed the way I think about things, the way I see things. It’s like a sixth sense, I see sexism everywhere. I find myself making sexist, anti-woman judgements all the time, and I’m abhorred by it. But at least now, I recognize it. It’s a small step, but still a step.

This book was an education for me, and I think it will be for you too. We never study women’s history in school, or the role women played in history. We learn about Betsey Ross (she made the flag), and then spend a paragraph on Suffrage, and that’s it.

I didn’t take any women’s history classes in college, and the one feminist class I took was not a good experience. I took a Women’s Lit course and was labelled “so male” by my classmates because I’m not a petite, “feminine” woman and because I disagreed with their interpretation of the short story “Sur” by Usula K. LeGuin. Eighteen years, and I’m still bitter about it.

So, since I’m having a hard time finding the words I’m going to take the easy way out, and share just a few of the surprising things I learned from and while reading The Feminine Mystique

There was much more. Much, much, much more. The Feminine Mystique is the kind of book you read and then it takes about the rest of your life to process what it really means to you and the world around you.