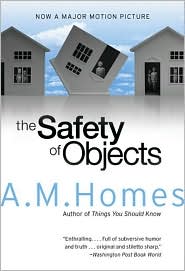 A.M. Homes seems to have assembled the stories in The Safety of Objects with an eye toward pushing the envelope. Sometimes, she pushes that envelope too far, but she does so in the interest of creating a potent sampler of abnormality.

All the entries in The Safety of Objects are weird and provocative. Homes' writing is so un-frilly, so devoid of anything figurative, it's almost aseptic. She likes to let her subject matter ? a boy sexually obsessed with his sister's Barbie doll, a father going deranged in bland, bland suburbia ? do the talking. That approach succeeds so long as the topic is sufficiently familiar; we've all heard of child abductions, for instance, but they're foreign enough to still be creepily fascinating. Homes' best stories here have a decidedly calm demeanor that belies a serious problem. “Looking for Johnny,” a story about a kidnapped boy who is returned when he doesn't match his captor's expectations, is made chilling by the boy's flat, cool narration. “Chunky in Heat” succeeds as a hallucination bathed in the haze and blear of an aimless summer night familiar to any bored teenager. “Esther in the Night” is a haunting glimpse into a side of parenthood few would willing to talk about.

But one time too many, Homes goes off the deep end. For instance, “Yours Truly” and “The Bullet Catcher,” both narrated in the first person, have the same problem. They're too strange and have no definite purpose. On finishing each, I couldn't answer the question I posed to myself: “What was the point of that?” It could be argued they're explorations of character, but they're so far gone they're not relatable.

Fortunately, there aren't enough bad stories to test the reader's patience. The Safety of Objects emerges as the most unsettling kind of strange of all ? the kind that sees itself as perfectly normal.