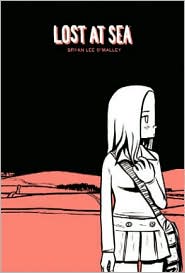 Once I chewed through every Scott Pilgrim book currently available, I felt a little bereft. What was I going to do? I couldn’t just jump into another graphic novel. What if it wasn’t funny enough? What if there wasn’t any magical-realismesque video game action? What if, what if it wasn’t any good?

Lucky for me the answer came in the form of a big box of graphic novels from Largehearted boy. In that treasure trove, I unearthed Lost At Sea, Bryan Lee O’Malley’s first book.

It was the perfect balm for my Scott Pilgrim withdrawal.

How so? Because it was the not so bad, not so good way to get over my Scottaholism.

Lost at Sea is a road trip graphic novel about four Canadian teens driving home from California. The star of the book is Raleigh, an intellectually gifted 18-year-old who has no soul. At least she doesn’t think she has a soul, she’s pretty sure a cat stole it when she was younger.

She happened upon this trio of classmates coincidence in California, where Raleigh was supposed to be visiting her estranged father but instead had hooked up with her Internet boyfriend.

What I liked about this one is that you can see glimpses of Scott Pilgrim in it. The friendships where affection is shown through acerbic wit and sarcasm, the floundering hero looking trying to come of age, and the littlest bit of music.

What I didn’t like about this one is that it feels really floaty. A lot of questions are brought up or insinuated but never fully explained or answered. At one point Raleigh vaguely mentions that her mother sold her (and her sisters) to a man in the very same Oregon town the group is stuck in after their car breaks down. Is this true? I can’t tell.

I’m not entirely sure what really happened with the Internet boyfriend either. Like I said it’s kind of floaty.

However, there is a scene towards the end of the book where the group is trying to capture stray cats in the hopes of helping Raleigh get her soul back. It’s beautiful, funny, and poignant. Probably worth the price of reading the book alone. It so perfectly captures the lengths true friends will go to when you’re in need.

This is one of those books I’d probably have adored when I was about twenty-two. There’s just something about the hopeless romanticism, the melodrama, and the what’s it all mean-ness of it that will appeal to young people who are at that point in their lives. Which, I guess, kind of makes sense, since the book is aimed at the late-teen crowd.

Like I said, it’s okay. There are worse ways to spend an hour. However, if you’re looking for a good step down from Scott Pilgrim while you wait the arrival of the last one, it’s absolutely perfect.