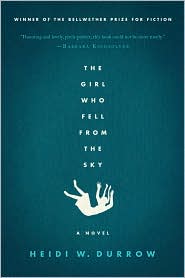 Usually when I discover books based on the author’s Largehearted Boy Book Notes essay, it’s something about the music he or she choose that captures my attention. Or, most likely, the author picks music that I really like and I figure since they have good taste in music they must be able to write a decent book (this is not always true).

With Heidi W. Durrow’s essay it wasn’t the music she selected, it was the title of the book that caused me to gasp and then clutch at my heart. As soon as I saw the words The Girl Who Fell From the Sky, I developed tunnel vision and my brain convinced me that it was a Chuck Klosterman novel based on that shitty short story he included in Chuck Klosterman IV.

Once my vision cleared and my sanity returned, I figured the least I could do was read Durrow’s novel after lumping it in with Klosterman based on title alone.

I’m happy to report that The Girl Who Fell From the Sky is leagues better than Klosterman’s story about a girl who seemingly fell from the sky.

In Durrow’s novel, a young girl, Rachel, is sent to live with her Grandma in Portland, Oregon. She’s sent there after most of her family, her Danish mother, younger brother, and baby sister, dies in a tragic fall from the roof of a Chicago apartment building. Her dad, a black man stationed overseas, is conspicuously absent.

Rachel has a tough time adjusting to life with Grandma in Portland. Not only is she grieving the loss of her mother, someone Grandma doesn’t have many kinds words for, but she’s doing it in the midst of people she’s never met before. More than that, Rachel really struggles with her identity not as an orphan so much but as a blue-eyed, light-skinned black girl.

There’s a lot of mystery surrounding what exactly happened that night on the roof, and the mystery unfolds told in shifting narratives through Rachel’s point of view as well as Brick, a young neighbor boy who saw the fall, Nella’s, Rachel’s mom, journals, and Laronne, Nella’s boss.

Each viewpoint character reveals a little more about the mystery surrounding Rachel’s family, which is nice as a reader. However, sometimes it felt a little confusing. I was never sure if I could fully trust the information revealed by the other characters. While I really liked the character of Brick, I wanted to spend most of the time with Rachel. Plus, Nella’s journals kind of confused me.

Plot-wise I think Durrow brings up a lot of questions she doesn’t ever answer, or at least answer with any sort of concreteness. I’m still not entirely sure why Rachel’s dad stayed away after the accident, or why he and Nella were separated in the first place. I have an educated guess, but it’s still a guess. More than anything I really wanted to know how Nella and her three children ended up in Chicago.

I’m having a tough time coming up with an actual opinion about this book. It was one of those that I enjoyed reading. The characters are interesting and the writing’s good, and yet I feel somewhat unsettled about the whole thing. I can only pin that vague sense of unease on some of the plot twists and turns. There’s a lot of tragedy in this book. I’m not sure if there are any hard fast rules about how many characters an author can kill off before it becomes gratuitous, but some of the death here felt unnecessary. I’m not sure what purpose it served.

Ultimately, I’m unsure about what the crux of the story was. Is it about Rachel coming to terms with her bi-racialness? Is she supposed to find out these dark family secrets that the reader learns from other characters? I’m not sure she does either. Which is probably why I feel unsettled, because I spent a good amount of time reading a book I enjoyed, but after finishing it I’m not entirely sure what happened. Weird.