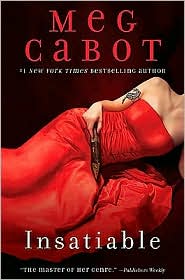 Insatiable by Meg Cabot is the kind of vampire lite schlock that chaps my hide. How the hell can you have a vampire book with no sexual tension at all and no biting, no draining of blood? The only reason Stephenie Meyer got away with that shit is because she was writing about teenagers and tapped into every woman’s genetic memory of what falling in love at that age was like.

Congratulations Ms. Cabot, you are the last on the bandwagon. I understand that you’re a young adult writer, so stick with what you know. Writing an adult vampire book requires more that rehashing what other writers have done. Oh, you have a heroine that has a supernatural power? Gee, that doesn’t sound at all like Sookie Stackhouse (who gets mentioned in Insatiable by the way, several times). And your heroine’s name is Meena? Really, just like in Dracula? Oh and the big bad vampire is the son of Dracula? Are you fucking kidding me?

Everything Cabot writes about in Insatiable has been done and done better, even by barely passable mediocre writers. Her plot is thin, her characters weak, and her dialog is a bore. By the time she writers her big action sequence – a dragon in a church – I was so resentful and angry at its predictability I nearly scrubbed the enamel off my tub.

I don’t usually hate books, but I hated this. I hated it more than Mary Janice Davidson’s Undead and Unwed – and that’s saying something, believe me.

Do yourself a favor. If you want a schlocky, poorly written vampire book that doesn’t stray from the most basic formula, go here. At least put yourself into it and have a good laugh.