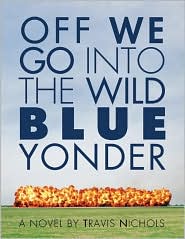 Off We Go into the Wild Blue Yonder is a new novel by Travis Nichols, with the title taken from a popular World War II bomber song. The story is told through a group of letters written to Luddie, a Polish woman, who hid the main character's grandfather from Nazi's during the war. The main character is a self-described 'good man' with plain brown hair and mossy sideburns, and also 'Madame Psychosis,' a woman correspondent between the past and the present. The letters are very bizarre and skip from the past to the present to an alternate what-could-have-been reality. The reader sees a version of reality through the eyes of someone who neglects all linear forms and instead tells the story in swirls. They are more comprehensible when one reads them like journal entries rather than missives.

The constant repetition in the letters makes it feel like Nichols is trying with every ounce of his being to get the story out to the world and completely understood. It also makes us feel the mania in the main character. This strange correspondence with Luddie gives the reader flash-backs into the young boy's life before he starts to go through some very formative mental changes. Whether Madame Psychosis lives in harmony with the good man, is in contention.

With this kind of main character it isn't surprising that the book has a chaotic-feel, and one might even like to imagine that Nichols dropped a bit of acid on his tongue while he sat typing this disjointed memoir of the grandson of a WWII pilot. Sections of this novel read like prose, which is quite appealing, but the abstract qualities of the story with its very mish-mash nature, are its main weakness. Style-wise, it is impressive, but for the purpose of actually telling a story, it is confusing.

Though the main character is troubled, he (and she) actually seems to have a healthy relationship with his grandfather and his girlfriend, Bernadette, who joins them on the journey to Poland and the past. After much airport hassle, the group gets off the ground, and encounters more difficulty with language-barriers, hearing aids, rusty memories, and faulty maps. An unexpected tenderness fills the pages as this unlikely trio searches for Luddie.

Some really great elements appear when the history of Poland is explored. The idea of learning a language is analyzed, as well as, what people seem to be and actually are. Stereo-types are dissected and the writing seems more concise. One could even say this novel is comparable to German for Travelers, in its examination of post-war culture and American generations exploring this past history. In Off We Go into the Wild Blue Yonder, Nichols shows us that sometimes the destination matters just as much as the journey.