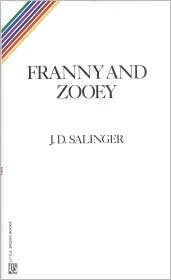 Since I have encouraged everyone I know to go back and re-read the books they read when they were younger, my Rock & Roll Bookclub chose J.D. Salinger’s Franny and Zooey for our May read. It is one of my sister Ericka’s favorite books. I’m not entirely sure why, especially when you consider she’s a pretty devout Atheist. I’ve developed a theory, or rather am developing it as these letters fall from my keyboard that Ericka’s affection for this book is due, in large part, to her affection for Salinger’s writing and that Salinger’s obvious affection for the Glass family (Franny and Zooey are Glasses) has spilled on to her. Affection by osmosis, so to speak.

I do not have the same affection. Franny and Zooey, originally published in book-form in 1961 after appearing as stories in The New Yorker in the mid50s, is about the fabulous Glass family and young Franny’s existential crisis. Yawn.

Call me a heretic, but two-hundred pages of people talking gets to be a drag after about 100 pages. I was with Salinger during “Franny” while she has a bit of nervous breakdown that may or may not be influenced by (what seemed to me obvious) an unplanned pregnancy. Franny’s at lunch with her boyfriend Lane an Ivy-leaguer/pompous blowhard who spends the meal yammering on about how brilliant he is. Franny will have none of it and tears into his egocentric phony bullshit. It’s pretty awesome. Besides that, there’s all the delicious 50s-ness of the story and the smoking and the three martini lunch. Franny’s a-okay in my book.

But then we come to “Zooey.” This novella is a confusing mash of what the hell. It starts with an introduction by Buddy (#2 of the seven brilliant, beautiful Glass children) about how he’s writing this story after being told about the incident portrayed in the story.

We then join Zooey soaking in the bathtub reading a long letter from Buddy (all of which is introduced by Buddy, because there’s nothing quite like being told what’s going to happen before it happens). After Zooey finishes the letter he is joined in the bathroom by his mother, Bessie. She’s in a tizzy because Franny’s having a crisis and is currently sleeping on the couch. The scene in the bathroom between Zooey and Bessie is great, fraught with delicious tension and action that goes a long way to telling us about their characters.

Sadly though, they eventually leave the bathroom and thus begins a very long, very boring conversation between Franny who sits on the couch, pets a cat, and occasionally blows her nose, and Zooey who intermittently sits at a piano and lays on the floor. They talk about their weird childhood (basically being raised by Eastern-religion obsessed eldest brothers Seymour and Buddy), egotism, phoniness, and The Way of the Pilgrim (the book that triggers Franny’s crisis). While getting bits of the Glass family history is interesting, listening to two 20somethings wax philosophically about religion is not.

Zooey’s story seems to exist only so Salinger can work through his own spiritual issues, and frankly, I didn’t care.