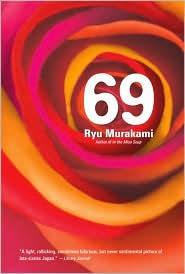 When it comes to dizzying collections of words, Ryu Murakami has long been the writer most likely to make me wretch with glee. He’s a Level 3 sensory offender, twiddling away at a reader’s gag reflex just because he can. There is a scene in his novel In the Miso Soup, (my favorite) that is so engraved in my brain that it has almost become a permanent ear worm. The depravity and desperation of Almost Transparent Blue have stuck with me for more than a decade. His novel Coin Locker Babies opens with such a shocking sentence that it’s a wonder anyone makes it to Page two — unfortunately.

But with 69, his roman a clef about a posse of restless, political, literary, music-loving teens noodling away at Simon & Garfunkel’s greatest hits on a guitar and talkin’ about a revolution, Murakami takes his best tool and hides it in a garage for the duration of the novel.

This is to say, I didn’t almost barf once.

Kensuke Yazaki is a trouble-maker, the only son of school teachers, a Pisces, an egomaniac. A romantic reading Rimbaud. He’s inspired by the political movements around him, and sets out to create his own. Shake things up at his school, which he sees as a mindless farm that churns out person after identical person. He borrows blueprints from pre-existing movements and organizes a faction of students to help him make statements: On one occasion they set up a barricade at the school, paint naughty graffiti all over the walls, coax a timid hanger-on to release an epic dump on the principal’s desk. This is part of a greater project: The Morning Erection Festival, during which he will show an original film starring some of the local high school hotties and with a little luck, find a white horse to co-star.

Much of this is to get the attention of a girl in his class, whom he refers to as “Lady Jane.” And, readers, she falls for it.

This book is to cute, what In the Miso Soup is to chilling. (Some people like to attach a Catcher in the Rye-like quantifier to it which is a bit of a stretch). In its best moments, Kensuke is 100 percent false bravado, quaking at the puckered lips in front of him. The last ten pages are pretty adorable, surprisingly. It doesn’t pack the punch of his grittier work, though.