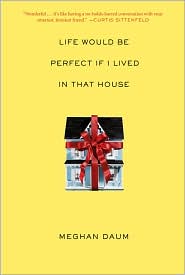 In the early 2000s, Meghan Daum did something totally unprecedented. She busted past a bunch of dead male authors with flapper fetishes, and Margaret Atwood, to land a spot in my Top 5 Favorite Books of All Time list with her collection of contemporary essays: My Misspent Youth.

It’s not a Pulitzer Prize-winning mix; There is a good chance you’ve never heard of it. But is a real gem, with pieces on the financial woes of residual college tuition and renting in New York City on a freelance writer’s income, and another memorable bit where she likens the idea of carpeting to a gross kid from elementary school. She’s funny, the way you want funny to be: subtle, conversational, doled out in moderation. And she was recognizable. It wasn’t my life she was writing about, but it was a life I recognized.

[Unfortunately she followed this with fiction that smacked dangerously close to her own life: Woman ditches out on the fast lane, lands in Lincoln, Neb., meets a dude in a flannel shirt and lives in an old farmhouse. And in the process learns a thing or two about love. It was a total three-star meh-fest.]

Daum is back doing what should be doing, conversational nonfiction writing, with what is ultimately an essay-ish love letter to house shopping and the places where she has lived, Life Would be Perfect If I Lived in that House.

Daum’s fascination with all-things-home gets an organic start, with her mother dragging her to open houses on the weekends. When she goes off to college, she averages more than one move per school-year: Dorm rooms, attics, summer apartments in the city. She follows a hankering for space to Nebraska and falls in love with old farmhouses. Then it’s off to Los Angeles, back to Nebraska, Los Angeles again. Rentals, dog-and-house-sitting gigs, and eventual ownership.

In a world filled with books about lipstick, high heels, and vampires, Daum’s motivation is solely for a fixer-upper that she can mold into something that totally mirrors who she is. While there is a bit of her romantic life on these pages, it’s super secondary. She cared less about her own appearance, she admits, that the appearance of the space where she was living. At one point she postpones a second date until she moves into her new place. And sometimes this causes a crisis of identity:

It was the dirty truth about my relentless search for ‘domestic integrity.’ It was this awful fact: you cannot pursue authenticity at the same time you are pursuing fabulousness. You cannot have it both ways. You cannot be the down-home farm girl and the queen of lower Fifth Avenue at the same time. You cannot be Maggie O’Connell (the floatplane-piloting, pixie-haircut-sporting, flannel-shirt-wearing cutie from ‘Northern Exposure’) and also Carrie Bradshaw from ‘Sex and the City.’ You cannot be Dorothy Parker and also Willa Cather. To attempt to be both of these things is to be not only neither, but in fact nothing.”

It is a niche topic, a different sort of addiction memoir, and very much a risk. If I didn’t know Meghan Daum’s writing, I’m not sure this book would ever leap off the shelf and into my hot hands. But it did, and Daum, for my money, remains one of the best voices in modern essay writing.