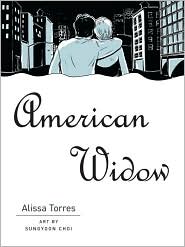 I wanted to read American Widow by Alissa Torres ever since I spied it on Largehearted Boy’s list of favorite graphic novels of 2008. When it arrived in a big box of books David sent me I was giddy. I was intrigued for years by the bare bones of the story — young woman loses husband on 9-11 while seven months pregnant. Yikes, right?

So I was ready when I popped open the cover on a rainy Saturday — Kleenex and a big bottle of water to stave off the dehydration that can come when one sheds a copious amounts of tears. Bring it on, I said.

I’m sad to report, it was not brought. It feels callous to diss on a book written by a young widow who lost her husband in a great, senseless tragedy, especially a young widow who is now raising their son alone. But you know what? I have to say this book left me cold. While it was quite educational, it was not emotionally gripping.

What the what what? How can this story so fraught with sadness not be gripping?

On the surface when you summarize the story in a few sentences, it is: In August 1998, Eddie and Alissa have a whirlwind romance in NYC and after seven months spent dancing throughout the city and falling in love, they marry. Fast forward to the wee small hours of the morning of September 11th, 2001 Alissa, seven months pregnant, lies awake next to her husband too angry to sleep. She turns her head from him when he kisses her goodbye before he leaves for his new job at Cantor Fitzgerald in the north tower of the World Trade Center. It’s his second day working there.

As planes crash into the towers, Alissa walks their dog and ponders leaving Eddie. Why she’s so angry we never find out. As a reader I was unsure if we don’t find out because in the aftermath of what happened on September 11th it just didn’t matter, or if the author was protecting her dead husband.

The rest of the book follows Alissa as she copes with the loss of her husband, the birth of her son, and the rollercoaster-y ride of being simultaneously pitied, lauded, and resented as the wife of someone killed in 9-11.

The book loses a lot of its emotional steam by spending a significant amount of time depicting how Alissa was forced to wade through an ocean of red tape to receive the money donated to the victims of 9-11. While this is educational and offers a new perspective on the way victims were treated after the tragedy, it doesn’t make for interesting reading. Maybe just seeing the first time the American Red Cross failed her would have been okay, but there are pages and pages and pages dedicated to the bureaucratic failings of the different disaster-relief agencies formed or in place to help victims. The bureaucrats’ insensitivity was horrifying, but reading about and seeing drawings of someone sitting in front of a desk . . . it’s just not interesting – narratively or visually.

This is a book that would have been served better by not being a graphic novel. As I turned each page I felt as though I was missing part of the story. The reader is left to glean a lot of information from the drawings, and they just aren’t up to the task. I think Torres’ story is one that’s important and needs to be told, it’s just not one that needs to be told graphically.