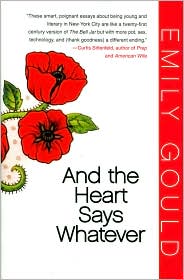 At some point we all sat around and wondered what the hell personal blogging would mean, ultimately, for the good old-fashioned world of the printed word. The kind that comes on paper, bound, with a flattering author portrait and blurbs from friends.

As an anecdote to that, I present Emily Gould’s book of personal essays And the Heart Says Whatever. The former go-go Gawker girl’s collection includes vignettes of being a sexually aware high school student wrist-deep in the trousers of an underclassman, to feeling like a freak-show at her college in the Midwest, to navigating the streets of the Lower East Side en route to gigs as a publishing assistant/hostess/shot girl. It is all tinged with the sort of romantic mooniness that comes with having an ex-boyfriend and/or making a self-destructive decision or two.

Gould, one of many young women living a certain intriguing lifestyle in the early aughts in NYC — in Gould’s case hipster! — was among the first to earn the title of “oversharer,” which is to mean that she occasionally mentioned her sex life in a public forum. Like most people who commit a word to the internet, then get addicted and commit more and more, there comes an illusion that you don’t have to have something to say. That if you write it, the audience will come because they, for instance, like your tattoos. With this comes the power to post “grilled cheese sandwich” accounts. This is what I had for lunch. And you should be fascinated by it because you are fascinated by me, dear audience.

And thus, Gould has written a book filled with the grilled cheese moments of her life — although instead of “what I had for lunch” it is “what I thought as I revisited my family’s beach house after my boyfriend and I broke up.”

These 11 essays are fine. They don’t take you by the hair and yank. And in fact, looking back at the titles it’s hard to define where one memory ends and another begins, what any one of them was about. Break ups, hook ups, jobs … very little about her experiences with Gawker — and admittedly, she wrote for the site when it still had headlines that rivaled The Onion. Nothing about her literati boyfriend Keith Gessen who wrote the great snooze-fest of 2008, All the Sad Literary Men. Plenty of metaphorical mirror gazing and second guessing.

Emily Gould is not the greatest writer in the world. But she’s spare and competent, and frequently houses a nice idea in a paragraph. And, frankly, she made enough words to turn them into a book, so she has that over millions of bloggers holding onto some sort of “Stephanie Klein and the magic book deal” syndrome. Gould is pleasant and likable. Her stories are are relate-able, but are in dire need of a bit of literary risk. This reminded me a bit of Sloane Crosley’s recyclable book of essays I Was Told There Would Be Cake, which is awfully boring, but garnered better reviews because of some sort of injustice in the universe.