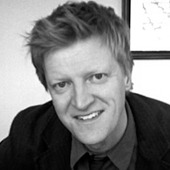 Every other week we are inundated with stories about the death of the novel and the book and the short story. On the opposite week we get stories about how someone is bringing it all back to life. Most of these stories are predicated on the idea that people don’t read anymore. Somewhere along the way reading got a bad rap. . . it’s something boring, lonely, socially-awkward nerds do because they don’t have anything better to do with their time.

Jeff Kamin is proving all that crap wrong. If literature had more readers like him, doing fun, innovative things, we’d stop seeing so many lit obits.

Jeff’s the moderator of Books & Bars, the book club that meets at Bryant-Lake Bowl the second Tuesday of every month. The club is wildly popular (just take a gander at the Facebook page to see how popular), so much so that most meetings fill the Bryant-Lake Bowl’s theater and spills out into the restaurant.

As if reinventing the book club weren’t enough, Jeff’s also using social media (I know, I know we all want to barf when we hear that phrase) to rally book nerds into doing fun stuff. To wit: The Books & Bars Tweet-up which will feature a book exchange, art, presentations, and readings by John Jodzio, Dennis Cass, Ethan Rutherford, and Maggie Ryan Sandford (I think we need to get Maggie to answer the 6 questions, so we can have a full set).

Okay, okay, I’m gonna stop rambling about Jeff now. Just three more things: 1.) he blogs about books for Forbes, 2.) He has a personal blog, the awesomely named Mustache Robots, and 3.) Books & Bars next meets on July 13 where they’ll discuss The Magicians by Lev Grossman (who will Skype into the meeting to chat with the bookclubbers).

1. What book(s) are you currently reading?
Just finished: Scott Pilgrim Vols. 1-5 by Bryan Lee O'Malley and The Magicians by Lev Grossman.

2. Have you ever had a crush on a fictional character? Who?
I guess I'll admit one. “Face it, you just hit the jackpot, Tiger.” Mary Jane Watson of The Amazing Spider-Man, but don't think that means Kirsten Dunst. I only have to say one, right?

3. If your favorite author came to Minnesota, who would it be and what bar would you take him/her to?
Favorite author to drink with might be Nick Hornby. We'd probably go to The Depot and First Avenue to enhance our musical conversation.

4. What was your first favorite book?
The Adventures of Huckleberry Finn was like a light going on regarding the comic potential in classic literature.

5. Let’s say Fahrenheit 451 comes to life, which book would you become in order to save it from annihilation?
“Fahrenheit 451 comes to life.” Sorry, couldn't resist an Airplane joke. But how you could resist the temptation to become The Bible? What powers would you wield? Would you be at least as powerful as The Ark of the Covenant? Just think of your Nazi killing abilities.

6. What is one book you haven’t read but want to read before you die?
Whatever Oprah tells me on my deathbed, but hopefully first hers, to read. How about those Harry Potter books? I heard they're good.

Actually, how about the one my sons or I haven't written yet. Because I’ve tried twice and given up on Infinite Jest.