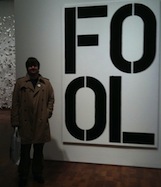 First I will start with the facts, and then I’ll insert an embarrassing confession, just to keep things interesting. So here’s the facts: Erik Thompson is a local music writer. He writes for City Pages, The Line of Best Fit, This is Fake DIY, and he used to write for Culture Bully. Don’t worry, if that’s too much to take in all a once, you can just hit up Erik’s Tumblr, Your Bird Can Sing where he very kindly keeps track of his latest reviews.

I first discovered Erik on Twitter @eriktmpls where he likes to talk about books and music. And, I’m here’s the deep, dark confession, one of my favorite things on Earth is when Erik and @solace go back and forth about some kind of music wonkery that is generally over my head. It’s as though Dick and Barry (from High Fidelity) have come to life and have Twitter. It is utterly delightful. So delightful, in fact, that it almost makes me want to be a musicgeek. Almost.

But, like I said, Erik’s more than a musicgeek. He’s a musicgeek who reads which is why we’ve got him answering our 6 questions this week.

What book(s) are you currently reading?
Solar by Ian McEwan, Blues & Chaos: The Music Writing of Robert Palmer by Robert Palmer, The Death and Life of American Journalism: The Media Revolution That Will Begin The World Again by Robert W. McChesney & John Nichols, Empire Of Illusion: The End Of Literacy and the Triumph of Spectacle by Chris Hedges.

Have you ever had a crush on a fictional character? Who?
Don’t laugh, but I guess that Pippi Longstocking was my first literary crush (and caused me to continually have a soft-spot for redheads). As I got older, I pined for Anna Karenina, and felt like I could’ve been the man to save her, as well as Becky Thatcher from Tom Sawyer, she was just a sassy little spitfire.

If your favorite author came to Minnesota, who would it be and what bar would you take him/her to?
Dave Eggers is my favorite author, not only because of the incredible books that he’s written, but because of what he’s done with the fame and fortune that his work has brought him. He has set up 826 Valencia writing programs throughout the US, giving kids the opportunity to write and be creative in a completely nurturing and safe environment. That freedom and encouragement is truly one of the best gifts you can give to a child. I respect him immensely, and would probably take him to Eden, the outside bar at the Chambers. On a beautiful night in Minneapolis, there is not a better spot to be in the city.

What was your first favorite book?
My first favorite book was Charlotte’s Web, which I distinctly remember my dad reading to me. As far as my first favorite books that I read myself, I’d have to say any of the early Hardy Boys mystery series-I became obsessed with reading/collecting them all. Most of my early allowances went to buying those books in hardcover.

Let’s say Fahrenheit 451 comes to life, which book would you become in order to save it from annihilation?
Wow, this is a tough question. But I’d have to go with Midnight’s Children by Salman Rushdie. The book is quite simply a perfect work of literature, and my favorite book of all time.

What is one book you haven’t read but want to read before you die?
Infinite Jest by David Foster Wallace. I used to think that the jest Wallace was referring to is that no one actually finishes his book. But I think I need to form a book club with some friends in order to read it-having a support group helped quite a bit with Ulysses, and would probably assist me in finishing this daunting work as well.