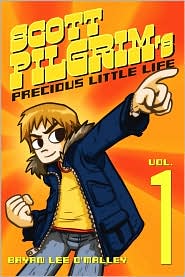 At first I was creeped out by Scott’s “relationship” with Knives (what a great, great name by the way). I wasn’t sure if I could get involved with a book that’s okay with a grown-up dating a teenager (grown-up being a relative term because Scott who is in between jobs and spends all his time hanging out is hardly mature). But then Scott’s friends and sister were sufficiently outraged and grossed out for me to get on board.

Hooboy, I’m glad I did because this book was probably the most fun I’ve had reading since, well, Tales of a Fourth Grade Nothing. Maybe I’ve had a lucky streak going on with the fun books.

Anyway, Scott’s all set he’s got the band, the girl, and a roommate who puts up with him. Life’s good, right? But then he starts having dreams about a mysterious girl on rollerblades. When Scott actually spies the girl at the library he kind of loses his shit. He keeps having strange dreams about her and finally meets her at a party.

Ramona Flowers is the girl from his dreams and after some sly shenanigans he gets her to go out with him. Of course they fall immediately in love. Then things get weird and Scott finds out he has to defeat her seven evil ex-boyfriends.

He only meets one of these evil exs in this book. I assume defeating the exBFs is a large part of the subsequent five volumes, which I cannot wait to read.

I was surprised by how much I enjoyed reading Scott Pilgrim, Vol. 1. A few of my comicbookgeek friends warned me against it, sure I’d detest it because things get really weird in the third act of the book. For people who aren’t paying attention I can see how the appearance of a squad of hipster chicks of doom might seem like it’s coming out of left field. But right around the time I Ramona apologized for haunting Scott’s dreams because his subconscious is a shortcut of some sort, I realized we weren’t necessarily dealing with a realistic story. Of course the manga-like art was another tip off. My one complaint of the book would probably be the art. I had a hard time keeps some of Scott’s friends straight because they all looked alike. I hope as the characters develop in later volumes this gets sorted out.