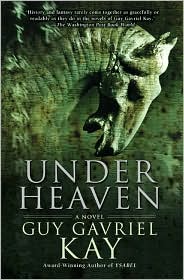 It doesn't take long to read a 600-page book when it's written by Guy Gavriel Kay. Inspired by the Tang Dynasty of 8th-century China, Kay beautifully blends historical fiction with fantasy in his latest novel, Under Heaven.

This novel has everything: power, politics, war, sex, love, concubines, warriors, ghosts, shamans, poetry (yes, poetry!), and how thin the line can be between friends and enemies.

Under Heaven quietly begins with Shen Tai, the son of an honored, fallen Kitai general, working alone to bury the bones of deceased soldiers from both Kitai and Tagur, the enemy Kitai fought which caused the more than forty thousand dead Tai is trying to bury.

Tai's acts were unknown to most, but slowly word spread and with it came great fortune, but fortune that may kill him. A Taguran princess, who was a Kitai peace offering sent to Tagur after the last war, was so pleased with Tai's acts that she gave him two hundred and fifty Sardian horses. These are not your ordinary horses. Giving a man one is a great honor. Five can make his rank higher in the empire. Two hundred and fifty would make him extremely rich and held with as much esteem as an emperor. It would also cause him to be a human target for jealous thieves.

Under Heaven follows Tai on his journey back to the capital to figure out what to do with the horses. His journey is dangerous and the empire has greatly changed since he secluded himself on the mountain. But this novel is so much more than the story of Tai. It's an epic novel that follows Tai's family, his friends, and the whole empire. It's beautifully written, has full, developed characters, and is a combination of adventure, politics, fantasy, and even a little bit of love.

I love historical fiction, so Under Heaven did not disappoint. I did find myself wishing the fantasy aspect of the novel were more prominent. The ghosts and the story about the shaman, and the person affected by the shaman’s acts, seemed so slight to me that the fantasy aspect could easily be taken out and a fantastic novel would still stand.