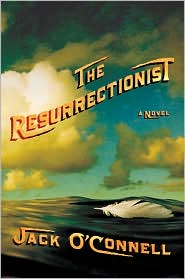 I wasn?t prepared to enjoy The Resurrectionist. On first impression, I was wary of the title?s archaic typeface. I was turned off by the nauseous colors of the cover?s nondescript watercolor wash, distinguished only by a single white feather floating on a puce-colored sea. I was literally judging a book by its not terribly attractive cover.

What?s worse is that I was led to believe The Resurrectionist was (gasp!) genre fiction—"part classic noir thriller, part mind-bending fantasy," according its jacket copy.

What?s the big deal with genre fiction? Nothing, really, unless you?ve attended an MFA program in creative writing, where the term, suddenly laden with all kinds of connotations, becomes extremely divisive and, quite often, a literary kiss of death.

To be fair, I attended an extremely unpretentious graduate program, probably as unpretentious as such things can get. I never heard my colleagues dismiss genre fiction, per se, so much as condescend to it. From one side of their mouths would come ecumenical praise for sophisticated and engaging examples of science fiction, mysteries, or westerns (one might submit for evidence the name of a "legitimate" author from those categories—Neal Stephenson, say, or Raymond Chandler); from the side of their mouths facing their thesis advisor or a respected visiting writer would come somber appeals to craft and timelessness, as if genre fiction couldn?t also possess these qualities. No one wanted to appear elitist by scoffing at genre fiction, but no one I knew ever made a concerted effort to write it, either.

I weaseled my way out of (most of) these debates by being a nonfiction writer. Things for me only got contentious when I had to argue that not all memoirs were self-indulgent (or fabricated, for that matter — which happened more than enough for my liking. As a genre, nonfiction is still in its infancy, and as such hasn?t yet acquired the canonical reverence, the genre partisanship, the almost evangelical adherence to certain conventions, that give rise to fiction?s divisions of high-vs.-low, literary-vs.-genre, elite-vs.-mass appeal. Don?t worry — nonfiction is rapidly shouldering all those burdens, and I?m sure plenty of nonfiction writers are probably already worried about appearing too mainstream or Oprahtional. Anyway. My point is that yes, The Resurrectionist is probably genre fiction, in some ways. But let me also say this: if you have some kind of knee-jerk aversion to genre fiction, The Resurrectionist might help you get over it. Because this book possesses many of the best qualities of genre fiction, and few of the bad ones: it reads fast, it sucks you in, it?s got plenty of sex and violence, and the jacket copy wasn?t wrong: it is noir-thriller, it is mind-bending-fantasy — a better description might be surprisingly sophisticated magical realism. But it also has plenty of mythology, psychology, mind-body mysticism, comic book heroics, carnival culture, and anarchic brutality mixed in for good measure.

The Resurrectionist begins as its protagonist, a pharmacist named Sweeney (just Sweeney) arrives in an industrial netherworld identified only as Quinsigamond (the former name of O?Connell?s hometown of Worcester, Massachusetts, by the way). The city is barely inhabited; the only denizens we meet are Sweeney, a menacing biker gang called the Abominations who squat in a defunct prosthetic-limb factory, and the staff and residents of the Peck Clinic, a fortress-like hospital where Dr. Peck conducts unorthodox treatments on comatose patients referred to him from all over the country. Sweeney?s son Daniel is Peck?s newest patient, and Peck agrees to take on the boy as his patient in exchange for Sweeney?s services in the clinic?s pharmacy.

It?s an intriguing set-up, rich with potential that O?Connell doesn?t waste, especially once the Abominations arrive on the scene, Jack and his son?s nurse begin getting freaky, and everyone begins shooting up on a very weird drug derived from — well, I won?t spoil it for you.

Those ingredients alone would be enough to make a heady noir thriller. But there?s also a parallel story, told in intervening chapters, of a fantastical comic book called Limbo about a roving band of circus freaks. Danny loved Limbo before he entered his coma, and his father clings to this strange comic book as the only source of clues about his son?s fate. The plots of Limbo?s story-within-a-story and Sweeney?s narrative mirror each other until they inevitably merge during The Resurrectionist?s trippy climax. Finally, the feather makes sense.

The only qualm I have with the Limbo narrative is that, if it is actually a comic book, why is it being presented only as text? This is most likely owing to practical limitations of both the author and his book, but how cool would it have been to fold an entire graphic novel into the pages of O?Connell?s novel? This is where I think O?Connell really comes close to joining the ranks of other genre-defying purveyors of the strange like Neil Gaiman, Alan Moore, or Susanna Clarke.

The Resurrectionist does, at times, commit certain genre-fiction missteps. It stretches credulity regarding normal human interaction and character; the book?s two main female characters split a little too cleanly down the virgin-whore dichotomy and both, of course, are sexually attracted to the protagonist, even if he is a ruined husk of a man. As the previous example demonstrates, characters aren?t quite as ambiguous or three-dimensional as real people—or the inhabitants of (gasp!) literary fiction—strive to be, though O?Connell does do a pretty neat job of making the good guys appear deceptively evil, and the villain initially virtuous. As often happens in mystery novels, authentic-sounding dialogue is occasionally sacrificed for efficiency?s sake as characters blurt out clumsy chunks of backstory like, "You want to tell me why you left the senior pharmacist position at the largest CVS in Cleveland to come to this nightmare?"

But I can overlook those flaws, and even welcome them the way we embrace the obnoxious conventions of other guilty pleasures. (Maybe unrealistic dialogue : noir fiction :: vacuous supermodel wannabes shrieking "I?m not here to make friends" : reality television.) The Resurrectionist is substantial enough to earn its cheesy moments, and if this is genre fiction, I want more please.