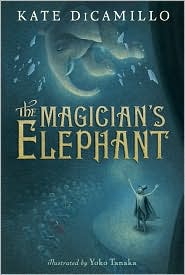 Kate DiCamillo is one of my favorite authors. The Miraculous Journey of Edward Tulane, Because of Winn-Dixie, and The Tale of Desperaux were just amazing. Of course I chose The Magician’s Elephant because I love her books and I wasn't really disappointed.

The book is about a boy named Peter who lives in a town called Baltese. He lives with a former solider is Vilna Lutz because his dad died at war and his mom after giving birth to his baby sister, Adele. Vilna Lutz claims that the baby didn't cry and died, but when Peter visits a fortuneteller, she tells him basically that his sister is alive and to look out for an elephant. Later on, an elephant comes through the ceiling in a theater and crushes Madam LaVaughn. The magician is blamed and put to jail. Peter goes to find Adele with the help of Madam LaVaughn, a laughing man, the magician, a policeman, and himself.

I like the book. She has fabulous word choice. Some of the words are new to me, which is great. It was very well written. One thing that could be changed though was the word choice is challenging, so younger kids might have a hard time understanding. Also, she uses 'said' a lot, so that could be changed with others word. Over all, I really enjoyed the story line and everything. I would give this a 4 out of 5 stars.