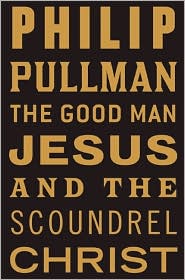 Though Philip Pullman's The Good Man Jesus and the Scoundrel Christ is not the razor blade & glue job offered by Thomas Jefferson in The Jefferson Bible, it does offer a fresh new look at the human-made Gospels that have shaped Christianity for a couple thousand years. Pullman decided to make Jesus Christ into two brothers: Jesus the crucified prophet and Christ the gospel writer who is tasked with recording Jesus' story.

Pullman wants the reader to understand that Christ was the one who created the Jesus that has inspired the Christian faithful for over two millennia. This means Christ was the one that took his brother's story and tweaked it to enhance its effect on those yet to be converted to following Jesus and the new Christian religion.

The Good Man Jesus and the Scoundrel Christ is a fictionalized version of my belief concerning holy books and scriptures: A few simple and divine revelations being almost choked out by human ideas and oppression. This book offers dangerous critical thinking opportunities for evangelicals and fundamentalists who desperately cling to the idea that the Bible is the word of God. It shows how easily humans can-and often did-slip in ideas not of a divine origin. This book succeeds were other fictional accounts of Jesus fail because it does not succumb to following a mindless evangelical or fundamentalist dogma and agenda.

The book is a quick read and displays Jesus' life in a chronological manner not unlike the Gospels themselves. It includes many of the familiar stories found in Matthew, Mark, Luke, and John, such as Jesus fed the multitude with five loaves and two fish. This passage offers a fine look at what this book is all about:

He took the loves and the fishes, and blessed them, and then said to the crowd 'See how I share this food out? You do the same. There'll be enough for everyone.'
And sure enough, it turned out that one man had brought some barley cakes, and another had a couple of apples, and a third has some dried fish, and a fourth had a pocketful of raisins, and so on; and between them all, there was plenty to go round. No one was left hungry.
And Christ, watching it all and taking notes, recorded this as another miracle. (p. 90)