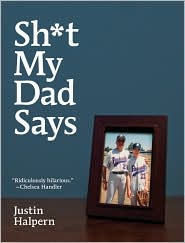 If you follow funny people on Twitter, you're probably one of the more than 1.3 million people following @shitmydadsays.

@shitmydadsays is exactly that – shit Justin Halpern's dad says. Justin Halpern, a broke twenty-nine-year-old aspiring screenwriter, had to move back in with his mom and dad, and to capture the insightful nuggets of information from his retired seventy-four-year-old father, Sam Halpern, he used @shitmydadsays.

Think of a foul-mouthed Archie Bunker (minus the racist crap) mixed with the grouchy Andy Rooney on “60 Minutes,” and you have Sam Halpern, a cranky old man who doesn't give a shit about anything and will bluntly give you his opinion on everything.

It's easier to share some of these bits of wisdom than to try describing them, so here are a few of my favorites from @shitmydadsays:

“I just want silence. Jesus, it doesn’t mean I don’t like you. It just means right now, I like silence more.”

“We didn’t have a prom. Dancing wasn’t allowed…What’s Footloose?…That’s the plot of the movie? That sounds like a pile of shit.”

“The dog is not bored, it’s a fucking dog. It’s not like he’s waiting for me to give him a fucking rubix cube. He’s a god damned dog.”

Justin Halpern started @shitmydadsays to share with his friends, but fans grew quickly, and not long after Hollywood came calling.

I just finished reading Shit My Dad Says, Justin Halpern's coming-of-age memoir, but more importantly, his memoir about his dad's unconventional wisdom. If you enjoy reading @shitmydadsays on Twitter, or if you thought those few quotes were funny, then you'll really enjoy the book Shit My Dad Says.

I thought I knew Sam Halpern from reading @shitmydadsays on Twitter, but I liked him so much more after reading the memoir. Sam Halpern is painted as more than a cranky, old man; he's a smart, caring, no-bullshit father. His advice is filled with profanity, and can sometimes be vulgar, but it's sincere and comes from a caring place. I didn't necessarily get that from reading his quotes on Twitter.

This book reminded me of my own father, a smartass, retired farmer who has a big heart (though don't ask him about the big heart thing, he'll deny it) and who, through his stories and jokes, gives some good advice. If you've also heard some great words of wisdom from your dad, in somewhat unconventional ways, you'll smile and laugh while you read Shit My Dad Says.

Get on the Shit My Dad Says bandwagon before the sitcom comes out, too. Yes, there is going to be a sitcom based upon this (all from a simple Twitter account), with William Shatner as the cranky old man. I can't wait to watch it with my dad.