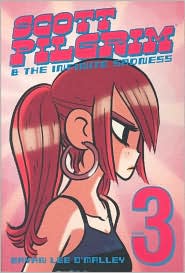 When we last left our favorite Canadian Hipster, he was trying to clean up after a few ex-girlfriends. In Volume 3 Scott Pilgrim vs. The Infinite Sadness, Scott’s dealing with the grand poobah of exGFs, Envy Adams.

Envy’s back in town toting a vegan boyfriend named Todd who also plays in her fabulously successful band, Clash at the Demonhead. She’s asked Sex Bob-omb, Scott’s band, to open for one of their shows.

A lot of this volume is spent in flashback, detailing how Envy and Scott met — their college band, how they broke up, and how Envy left the band. Along the way we learn how all the supporting characters (roommate Wallace Wells, Stephen Stills, etc.) wove their way into Scott’s life. It’s a little bit of a Scott Pilgrim history lesson, and it’s totally awesome.

What I liked so much about this volume is how despite the fact that vegans are like psychic-Jedis and most of the story takes place in a videogamesque version of Toronto, so much of the story feels emotionally genuine. When Envy pops back into town Scott’s leveled, Ramona’s suspicious and a bit jealous, and most of Scott’s friends are pissed because they hate Envy (as all good friends hate the ex who wrecked you).

Sure it feels like a tired story — 20somethings rally around their friend when the train-wreck ex arrives — but it’s not tired at all. Mostly that’s because of all the video game fun. When Vegan-Todd goes after Scott, ostensibly because Todd is Envy’s current BF, he uses psychic powers bestowed on him by the vegan masters. Yes, in the world of Scott Pilgrim vegans are bestowed super powers because they’re smug and superior. It’s funny.

Eventually (and this is not a big spoiler) we learn that Todd is also one of Ramona’s evil-ex-boyfriends. Scott struggles to beat the psychic-evil-ex, keep his relationship with Ramona moving forward, and reach some sort of closure with Envy. It’s infinitely entertaining. Like the other books in the series it’s really funny filled with indie-pop-culture and self-referential humor. At one point Scott asks Ramona, “what happens next?” and she replies “thirty-pages of explosions and tidal waves.”

Reading this series has been so much fun I want everyone to read it so I can start making Scott Pilgrim references and jokes that someone besides me will get.