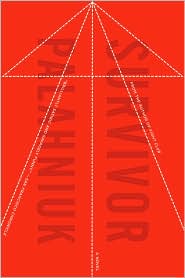 My first Palahniuk came in the mail as a birthday gift from one of those friends who can get away with not getting you a birthday gift. It was a nice surprise. One of those thoughtful “thought you would love this” thoughts. And I did. That book was Diary, and I loved the unconventional style, and the wickedness, the ticks, the humor and how it was all just so. . . cool.

So I read more, and fell into the whole lore of The Palahniuk. The fans fainting at his readings, and the way he used to respond to fan letters with random, silly trinkets from his home. Like most 17-year-old boys, I got so nuts about him that I even went so far as to learn how to pronounce his last name. Palahniuk. It’s a toughie for the posers.

Somehow in all of this, I missed Survivor, his second novel. Tender Branson is one of the only remaining members of a Nebraska-based cult with big ups for first born sons, and little interest in the rest of the litter. In the opening scenes, he is dictating his life story into the black box of an empty airborne airplane that he plans to run into a suicidal death spiral once the final engine burns out.

It’s a checkered past, in which his twin brother (3 minutes older) earns favor within the family, and Tender is cast out to do his cult duties in the mainstream public. He works as a social navigator/house cleaner/gardener to a wealthy couple he knows only via speaker phone. By night, he takes advantage of a phone number misprint, and responds to suicidal callers who have misdialed what they think is a hotline number. He advises them to pull the trigger.

He falls for one of the dead caller’s sister, Fertility, a young psychic. Meanwhile, more and more members of the Creedish Death Cult are dying off. The percentages of living members drop exponentially weekly until he is thought to be the only one left. Then he gets the opportunity to monetize his status.

All of the reasons I had, at one time, like a nine-book love affair with Palahniuk are now the exact things I find annoying about his style: the ticks, the cool, the wicked, the “You do not talk about Fight Club”-ness of it.

Admittedly, this book just isn’t that good. The plot has gaps where it runs in place for too long, then without warning hops in a new direction. (NOW TENDER BRANSON IS A CELEB! NOW TENDER BRANSON’S ENTIRE LIFE IS EFFED UP BECAUSE HE IS A VIRGIN!)! A weird sub-something or other is introduced late in the book that feels like a bad thread in a bit of improv comedy.

I think if I’d read this one first, or even second, I would have liked it more. But by now this schtick is so tired.

On the other hand, know what’s awesome? Palahniuk’s nonfiction.