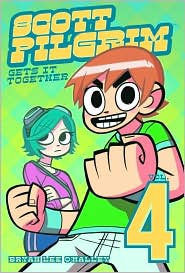 Every time I start to write about one of the books in the Scott Pilgrim series, I thumb through the book to refresh my memory. Without fail, each page I land on brings a giant smile to my face. It’s probably my job as a “reviewer” (in quotes because I’m not sure I really review books so much as talk about them and being a book talker sounds dumb) to explain exactly what it is about these books that’s so appealing. Now I’m talking about Volume 4 of the six-volume series and I still haven’t captured the magic.

Perhaps Scott Pilgrim is something you have to experience. After I finished the first two volumes, I loaned them to my 11-year-old nephew Max. He devoured them quickly and asked for the rest of the series. He finished it in a day or two. That’s how awesome these books are.

I am not surprised that Max and I love the books equally. He probably got all the video game references and inside jokes that went right by me. I’d also wager he didn’t get many (if any) of the indie rock references. See? There’s something for everyone.

Volume 4, Scott Pilgrim Gets it Together finds Scott at an emotional crossroads. He can either continue on in his unemployed, sharing a bed with Wallace, his gay roommate, ways or he can pony up and act like an adult.

This inability to grow up or at least start acting like a grown-up puts a lot of strain on Scott’s relationship with Ramona. While you can tell she loves him, she’s really ready for him to start putting some effort into life.

Then, of course there’s the exes to deal with — for both Scott and Ramona. Scott’s ex is less on the evil side and more on the romantically dangerous side. Ramona’s ex is, of course, evil, but not an ex-boyfriend. Shock!

This volume is not as full of the silly videogame fighting (though still with the life as a videogame stuff — Scott gets 999 exp points when he gets a job), it does a lot of move the story of Ramona and Scott’s relationship forward. It’s nice because you can see O’Malley raising the emotional stakes as the series races to its conclusion. And gah, I cannot wait for Volume 6 to come out.