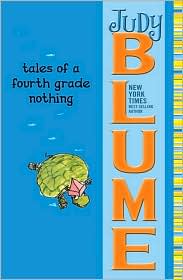 Sometime around the time I read Blackbriar I decided it would be fun to revisit other books I loved while growing up. I wanted to see how the books held up, and find out how much I’d remembered.

Second on this list of childhood favorites is Judy Blume’s Tales of a Fourth Grade Nothing. As a kid I had a penchant for books that focused on the forgotten, beleaguered, and under-appreciated oldest sibling (please see, Ramona really was a pest). Judy’s book about Peter Hatcher was right up my elementary school alley.

If I may be so bold, it appears that my elementary taste was impeccable. As I sat in my La-Z-Grrl a few Sunday afternoons ago reading “Tales” I wasn’t just surprised by how well the book held up but how funny it was. I’m not even kidding when I say that I busted out laughing more than a few times. Peter’s an earnest, smart kid who just wants to keep Fudge, his awful younger brother, out of his bedroom. While reading this book I had flashbacks about how my awful younger sisters used to sneak into my bedroom and listen to my Madonna records.

And as if Fudge weren’t enough to deal with, there’s Sheila. Sheila the bossy know-it-all who is in Peter’s class and lives in his building.

I don’t believe in Cooties anymore. When I was in second grade I used to examine myself to see if I had them. But I never found any. By fourth grade most kids give up on cooties. But not Sheila. She’s still going strong. So I have to keep a safe distance from her.”

Sheila causes Peter more than a little distress, but she’s a rank amateur compared to Fudge. Peter’s younger brother is a two-year-old terror. He refuses to eat dinner, falls off a jungle gym (while under the supervision of Peter, Jimmy Fargo, and Sheila) and knocks out his front teeth, stars in a TV commercial, but worst of all he’s obsessed with Peter’s turtle, Dribble.

A lot of the drama in the book comes from Fudge’s desire to get to Dribble and Peter’s desire to keep Dribble out of his clutches. It’s the kind of young sibling rivalry that happens in homes all across the world. It seems petty to grown ups but it’s very real and genuine to kids. And because Blume’s a genius she relents a few times. Peter admits to finding Fudge pretty cute when he sleeps and slurps on his fingers. Though he doesn’t admit it, he’s kind of pumped the way Fudge will do stuff only after he does it first.

The book is pretty episodic, with each short chapter encompassing a single incident that doesn’t necessarily build on the one that came before it. However, there are few thin threads that weave throughout the book to reward readers (or listeners) who pay attention.

Though the book was published in 1972 it holds up pretty well. Peter’s dad, who works in advertising, comes off as a bit of a Darrin Stevens (from “Bewitched”) character, with his advertising clients hollering a lot and rudely demanding things (and if I think of it what kind of Mad Man would invite his biggest client to stay in his tiny NYC apartment with his wife and two kids?), but I’m pretty sure no kid is gonna get that connection. And there’s a scene where Mrs. Hatcher talks about spanking Fudge. It was a little weird to read that today though I don’t remember it causing me to bat an eye back in the 80s when I first read this book.

I loved reading it again. It was a lot of fun and I can’t wait to find another childhood favorite to rediscover.