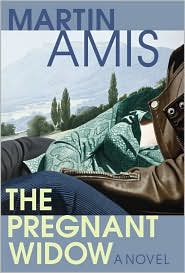 This is one of those novels where a handful of young horn dogs go live in a castle in Italy for the summer. Martin Amis’ The Pregnant Widow is set in 1970 and the writer-ly Keith Nearing is 20. He’s hanging out with his plain Jane girlfriend Lily, and reading classic novels next to the pool. Meanwhile Lily’s best friend Scheherazade has transformed from a mousy Meals-on-Wheels driver to the buxomest thing to ever prance around in a monokini (which is, of course, half of a bikini).

Keith masks his feelings from Lily, with whom his relationship is becoming more and more friendly, sibling-esque, while plotting how he can turn his late night card games with Lady D-cups into something more intimate. Keith spends plenty o’days panting over Scheherazade, who has a mysterious and seemingly disinterested boyfriend named Timmy who keeps finding reasons to stay away from the castle. Meanwhile, a young daredevil hotshot count — who weighs in at less than 5-feet-tall — is using psychology to round the bases with the sexpot, who is just starting to realize she is a sexpot.

Other visitors — whether long term or short stays — include: Rita, and her dinner conversations about buggery, who is nicknamed “The Dog,” and Keith’s BFF Kendrik, who has ignored the suggestion of his friends to not sleep with “The Dog.” Keith’s friend Whittaker and his lover Amen. But it is Gloria Beautyman, who has a disproportionate body — Normal on top, fantastic can — who finally distracts Keith from Scheherazade with her Elizabeth Bennett role playing and nude prayer sessions.

When Keith isn’t thinking with his pants, he’s worrying about his little sister, a heavy-drinking temptress who sleeps with entire football teams.

The whole book is like this, well, at least 300 pages of it is like this. A literary sexual comedy set in the sexual revolution, and not unlike the Woody Allen movie “A Midsummer Night’s Sex Comedy,” where the silliness is replaced with wittiness. The final 50 pages are a rush-job conclusion. The aftermath. Who married whom; Who had a deep dark secret during that stay at the castle; Who changes Keith’s life, and turns him from a lonesome loser reeking of desperation into a dude who can get a lady?

Aside from some weird pacing and some Brit slang, phraseology, and vagueness that I wasn’t clever enough to decode, this is a fun and funny portrait of a defining summer in the lives of this crew. And, of course, Amis has done nothing to mask that this one is pretty damn autobiographical, so that’s fun, too.