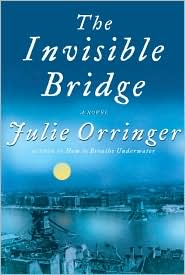 I expected to like Julie Orringer's novel, The Invisible Bridge, more than I did. It had a great premise: a love story torn apart by World War Two, and a plot that spanned the European continent from Budapest to Paris. Plus, Michael Chabon, one of my favorites, gave a very positive blurb on the back of the ARC. But I have to be honest. I was disappointed.

The book is about Andras L?vi, a Hungarian who is studying architecture in Paris. His brother, Tibor, is a prospective medical student hoping to study in Italy. Andras gets work at a theater, which leads him to meet a woman named Klara Morgenstern. Love blossoms between Andras and Klara, but many hurdles stand in their way, including Klara's troubled past. This is prior to World War Two and their intersecting lives unfold against the backdrop of pre-war Europe. As it happens, Andras and Klara are both Jewish. This heightens the pre-war tension as Paris slowly bares its anti-Semitic fangs.

This happens over the first 300 pages.

The next 300 pages are filled with what happens as the war erupts. Orringer has plenty of twists and turns, so I don't want to give anything away. But, as you might expect, the fact that the main characters are Jewish will come into play.

I won't deny that Orringer tells a good story. Her main characters are well rounded and have rich histories. Her sense of place is very strong, and I did feel plunked down in the middle of both France and Hungary as I read the novel. So what was it about the book that failed for me? The pacing.

Orringer takes 300 pages to set up the story. She fills those pages with important, semi-important, and unimportant characters. But I was left wondering who was and who wasn't important because each character was given plenty of attention. Characters get introduced, abandoned, forgotten, and then reintroduced hundreds of pages later.

The last 100 pages read like an outline. To me it felt like writing on a piece of paper, but starting too big so that there is barely any room left at the end. Orringer took so long in setting up the pieces that she doesn't have any room left to put them into action.

I don't know if Orringer hurried to meet deadlines or if she was constrained by a page limit, but the ending was not satisfying at all. What started out as a relaxing read turned into a rushed dash to the finish: where weeks once unfolded over entire chapters, now months are crammed into single paragraphs.

What I think Orringer should have done is broken this book into two parts. It would have allowed for the second half to be fleshed out, which would have made the story much stronger. There's plenty of good stuff in here, and it deserves to be given a chance to breathe.

Unfortunately, we're left with a 600-page novel that loses its steam around page 400.