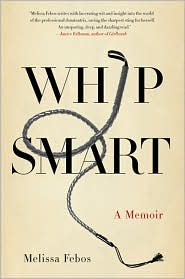 This is exactly the sort of thing I like to read. Addiction memoirs — especially complicated well-written ones — are my Twinkies hidden under the bed.

Febos’ interest in the domme lifestyle is piqued when she moves to New York City and finds out that her next door neighbor, who has a mutual friend, is the kind of person whom men will pay for pleasure of cleaning her toilet. Eventually, our hero is scouring the dungeon ads in alt weeklies and lands a gig in a nondescript joint in the middle of Manhattan. This dungeon is outfitted with rooms catering to various fetishes: A place for cross dressing, a room set up like a medical office, a room that includes a coffin-like space for optimal sensory deprivation. Febos sits in on a few sessions, an on-the-job tutorial from her coworkers, and then she is ready and rarin’ to go.

Febos goes on to tells about playing mean mommy, giving enemas, floggings and golden showers. Eventually she agrees to be the submissive for a few trusted customers, she also takes a few freelance gigs, she relishes her show-stopping response to the age-old question “So … What do you do for a living?”

All the while, she is operating as what seems to be a functioning heroin addict. She injects herself in the bathroom at work, slips off to abandoned areas at parties. She cruises across town to meet her dealer. Aside from some barfing, none of this seems to interrupt her life too much, aside from keeping her habit a secret from close friends. And in the meantime, she’s cranking out papers and going to college and maintaining good grades.

This book is pretty compelling, especially the way that Febos is able to write about all sorts of stuff she did, years after doing it, with an even keel and no judgment on her former lifestyle choices — despite having retired from both drugs and domination. At no point does it become an After School Special with a triumphant conclusion. It’s just her story, and it’s just interesting.