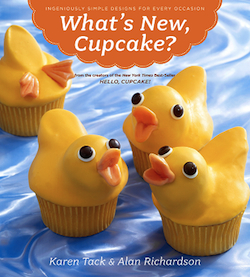 If you give me a recipe I can make a damn good meal, but I’m not one of those people who can work my own non-recipe magic in the kitchen. How much milk should go in this? Is it half a cup of fresh garlic or half a tablespoon? What the hell is Tarragon? Trust me, I’m a mess without the written recipe.

The same goes for decorating cakes and cookies. I can do some text, but that’s about it, which is why I loved 2008’s Hello, Cupcake!. Karen Tack and Alan Richardson blew my mind with their creativity in decorating cupcakes. Using things like doughnuts, M&Ms, colored Tootsie Rolls, coconut, colored sugar, Fruit Roll-ups, and a host of other candies, Tack and Richardson gave step-by-step guides on how to decorate amazing cupcakes beyond anything I would’ve been able to imagine. Some cupcakes looked like mashed potatoes and gravy with some peas and carrots on the side. Some looked like penguins. Others like bowling pins and a bowling ball. My favorite was the garden and my friend Jenn and I even tried to make our version of it.

With how much I loved Hello, Cupcake!, I was so excited to hear that Tack and Richardson were coming out with a new version, What’s New, Cupcake?. The cover has some adorable duck cupcakes on it, so I snatched it up instantly without even flipping through it.

I should have flipped through it.

What’s New, Cupcake? is no where near as great as Hello, Cupcake!. The designs aren’t as cute and some of them just seem pointless, like the one they call Sweet Talk. Sweet Talk is for Valentine’s Day and it involves taking pound cake, cutting big hearts out of it, decorating them to look like candy hearts, and placing them on top of cupcakes. Why would I need to place a cupcake-sized heart on top of another cupcake? It adds no value to the cute hearts (the decorated hearts are cute) to place them on top of another cake.

Another pointless one is called Karaoke Cupcakes, and it involves putting microphones, made out of small ice cream cones and doughnut holes, on top of cupcakes. That’s not really design. I could make separate items and simply set them on cupcakes.

There are some cute designs throughout the book that I will be making. You’ll see the apples and the golf course in my kitchen soon, but I’ll be skipping Pantry Pets, which is basically cockroaches on top of a cupcake. Sure, they’re made out of dates and rolled caramels, but I would not want to serve them to anyone.

One thing that is better in What’s New, Cupcake? is that they give a more instructions. At the beginning of the book and for each of the designs, Tack and Richardson give more explanations and visual guides on how it all works. In Hello, Cupcake! there were a few designs that I just couldn’t figure out, but I think I could figure out how to do all the designs in What’s New, Cupcake?, I just don’t want to. Devour Hello, Cupcake! but put What’s New Cupcake? in the disposal.