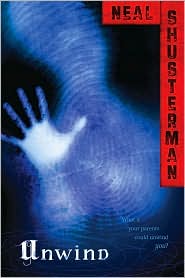 The premise behind Unwind by Neal Shusterman is a little hard to swallow. Set in the not-too-distant future, years after the second United States civil war, fought over abortion, teenagers are dealing with the aftermath of the agreement that ended the war. The two sides agreed that abortions would no longer occur, but the parents would get three options: keep the child; abandon the newborn baby on the doorstep of a home without getting caught, thus obligating those who find the child to take it in (it’s called “storking”); or unwind the child.

Unwinding is the most heinous of the three. When children are between the ages of 13 and 18 the parents have the option of unwinding them, which is basically sending the teens to a harvesting camp where their body parts are harvested and given to those who need organs, arms, brain tissue, etc. All body parts are used, so teenagers are told it’s not like they’re dying, they’re just living on in a different form. They get no defense, no court case, and their parents don’t have to give reasons as to why they’re unwinding their children, just sign a slip of paper and it’s done.

But it’s not the heinous act that’s hard. It’s hard to swallow because how could that agreement appease anyone on the pro-life and pro-choice sides? How could harvesting body parts from ill-behaving teens be seen as acceptable?

I tried to put my judgments aside. This is fiction, after all.

We start Unwind by following Connor, a problem teen running from his signed unwind papers. He shortly runs into Risa, an orphan who was supposed to be unwound to make more room at the orphanage, and Lev, a teen who actually wants to be unwound because his religious parents say it’s been destined by their God before he was even born.

Throughout Unwind these teens, and other unwinds they meet, are running from the police in the hopes of surviving until their eighteenth birthday. If they can reach 18 without being caught, even if there is a slip of paper calling for their unwinding, they can’t be touched.

Putting judgments aside and accepting this society, this is a good story. The kids are on the run, they find some friendly help along the way, and they’re fighting against a society who doesn’t see them as real people. Teens fighting against the man.

Wait a minute. Isn’t that the overall premise of most young adult novels? Again, stop judging.

It’s a good story, but it’s not fabulous. There are too many times when I’m told what each person is thinking right after they’ve done or said things which showed what they were thinking. I have a hard time being told what’s going on after I’ve been shown what’s going on. This is actually a compliment to Shusterman. Shu, their actions and words were written well so you don’t need to explain it even further.

Unwind is an interesting story, which may make you think a bit about life and whether or not our differences could lead to a society like this, but skip over some of those unnecessary thoughts that just re-explain things. You’re smarter than that.