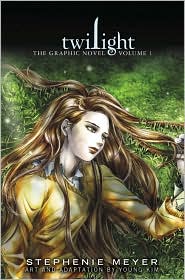 Stephenie Meyer is going to become the Madonna of authors if she doesn’t watch it. The Twilight Saga books made her a millionaire. The movies are making a mint and giving millions of women, young and old, “practice” material. Then she agrees to a graphic novel concept – after all of the words have been written and two or three of the movies are in the can. Genius! In the way that J.K. Rowling got millions and millions of kids reading again, Meyer is going to try and get her huge fan-base reading a new art/literary form. It’s brilliant. Why? Because this franchise needs it. And I can’t help thinking that by agreeing to another visual concept for her work Ms. Meyer was slightly disappointed in the movies as well.

With Twilight: The Graphic Novel, Volume 1 we get a reworking of the story, cutting out much of Bella’s brooding bullshit. And we only get the action scenes, so the book moves along at a great pace. The art and images here are actually better than the movie. It’s how the movie *should* have been. If you’re a fan of the series, you’ll enjoy seeing the story and characters with a new anime twist. If you’re hard-core Team Edward or Team Jacob you’ll be slightly disappointed that the characters on the page show more emotional depth than the actors on screen. All due respect to Robert Pattison’s hair and Taylor Lautner’s teeth. To fans of the books, I think the movies are a huge disappointment. Granted, they are nice to look at – the acting and adaptation fall so far short of even a mediocre standard. Twilight: The Graphic Novel, Volume 1 redeems the visual concept enough for me that I’ll skip the movies from here on out and await future volumes of the graphic novel.